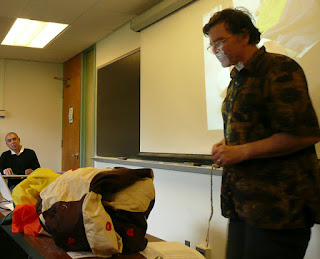 We have done some workshops together - this is the first one in 2006 led by Thurston in Cornell when he asked for my crocheted hyperbolic planes which I developed following his idea. Eventually it led me to write a book Crocheting Adventures with the Hyperbolic Planes and Bill Thurston wrote a forward to it. 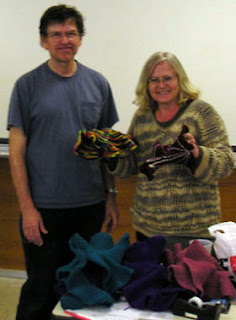 In Joint Math Meetings 2012 in Boston I was so moved that we both were on stage to receive prizes. Bill Thurston was awarded the Leroy P Steele Prize for seminal contribution to research by AMS. In the response he said:

I have been very lucky to have a long stream of wonderful students. They and others have built up
a thriving mathematical community well versed in geometric structures on 3-manifolds, as well as other related structures on 3-manifolds, such as taut foliations, tight contact structures, etc. There are still many mysteries to solve in this area. I used to feel that there was certain knowledge and certain ways of thinking that were unique to me. It is very satisfying to have arrived at a stage where this is no longer true—lots of people have picked up on my ways of thought, and many people have proven theorems that I once tried and failed to prove.

Here we are both after the Prize session - our last picture together: 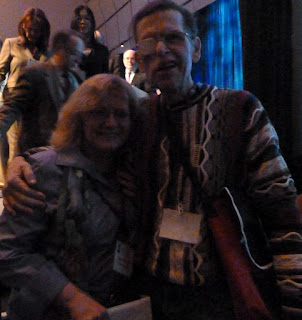 photo David Henderson
Bill, I will always treasure you calling me your friend and encouraging to do what I am doing. I will do what you wanted me to do - to continue to show people how beautiful geometry is.
This is how I will remember you: 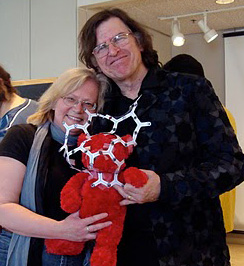 Mathematics sings when we feel it in our whole brain. People are generally inhibited about even trying to share their personal mental models. People like music, but they are afraid to sing. You only learn to sing by singing. - Bill Thurston from the Forward to Crocheting Adventures with the Hyperbolic Planes. 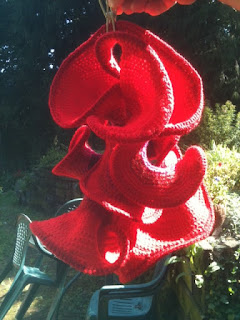 Some time ago Bill Thurston gave me a small paper model and dared me - can you crochet this? About a week ago I finally figured out how to and took a picture above. I wanted to e-mail this picture to Bill but thought - I should make a better picture first...
Now this is the first in a collection for me to make "Remembering Bill Thurston". 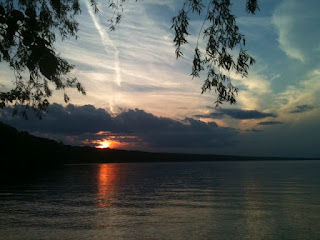 It's not mathematics that you need to contribute to. It's deeper than that: how might you contribute to humanity, and even deeper, to the well-being of the world, by pursuing mathematics? Such a question is not possible to answer in a purely intellectual way, because the effects of our actions go far beyond our understanding. We are deeply social and deeply instinctual animals, so much that our well-being depends on many things we do that are hard to explain in an intellectual way. That is why you do well to follow your heart and your passion. Bare reason is likely to lead you astray. None of us are smart and wise enough to figure it out intellectually.
The product of mathematics is clarity and understanding. Not theorems, by themselves. Is there, for example any real reason that even such famous results as Fermat's Last Theorem, or the Poincaré conjecture, really matter? Their real importance is not in their specific statements, but their role in challenging our understanding, presenting challenges that led to mathematical developments that increased our understanding.
The world does not suffer from an oversupply of clarity and understanding (to put it mildly). How and whether specific mathematics might lead to improving the world (whatever that means) is usually impossible to tease out, but mathematics collectively is extremely important.
I think of mathematics as having a large component of psychology, because of its strong dependence on human minds. Dehumanized mathematics would be more like computer code, which is very different. Mathematical ideas, even simple ideas, are often hard to transplant from mind to mind. There are many ideas in mathematics that may be hard to get, but are easy once you get them. Because of this, mathematical understanding does not expand in a monotone direction. Our understanding frequently deteriorates as well. There are several obvious mechanisms of decay. The experts in a subject retire and die, or simply move on to other subjects and forget. Mathematics is commonly explained and recorded in symbolic and concrete forms that are easy to communicate, rather than in conceptual forms that are easy to understand once communicated. Translation in the direction conceptual -> concrete and symbolic is much easier than translation in the reverse direction, and symbolic forms often replaces the conceptual forms of understanding. And mathematical conventions and taken-for-granted knowledge change, so older texts may become hard to understand.
In short, mathematics only exists in a living community of mathematicians that spreads understanding and breaths life into ideas both old and new. The real satisfaction from mathematics is in learning from others and sharing with others. All of us have clear understanding of a few things and murky concepts of many more. There is no way to run out of ideas in need of clarification. The question of who is the first person to ever set foot on some square meter of land is really secondary. Revolutionary change does matter, but revolutions are few, and they are not self-sustaining --- they depend very heavily on the community of mathematicians.- Bill Thurston

Some  thoughts on mathematics by Bill Thurston from August 2011