Stitches in Time and Space 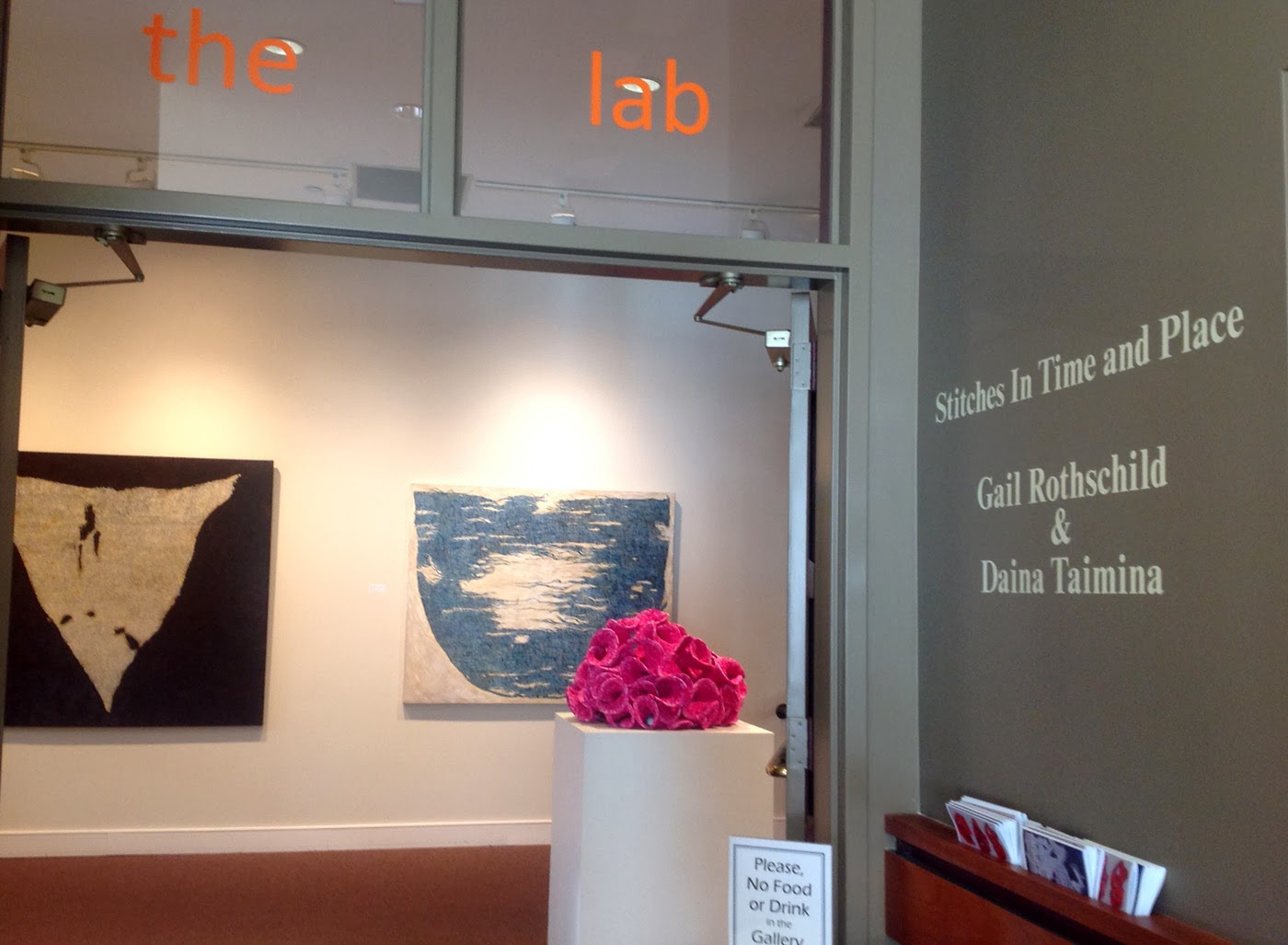 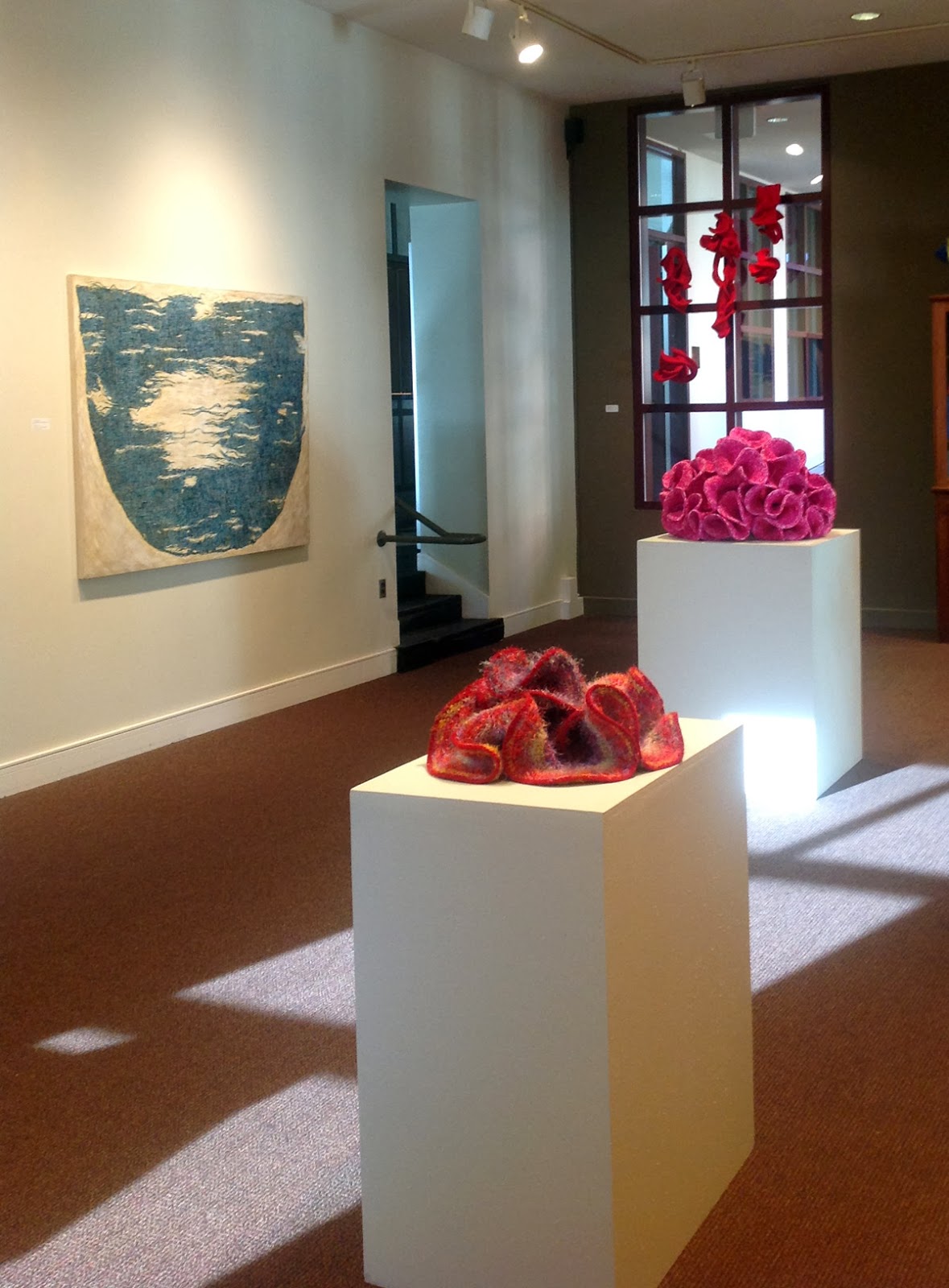 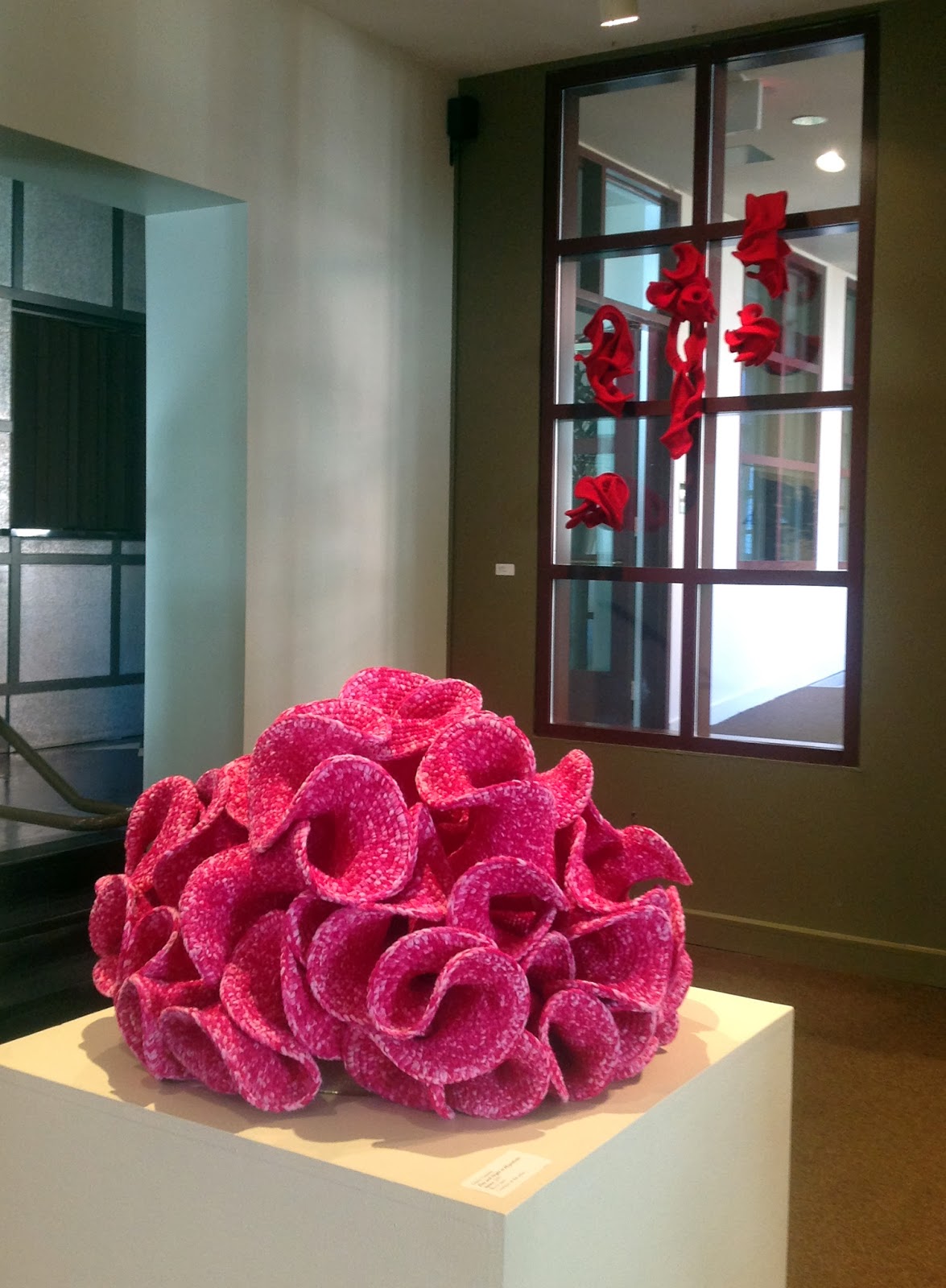 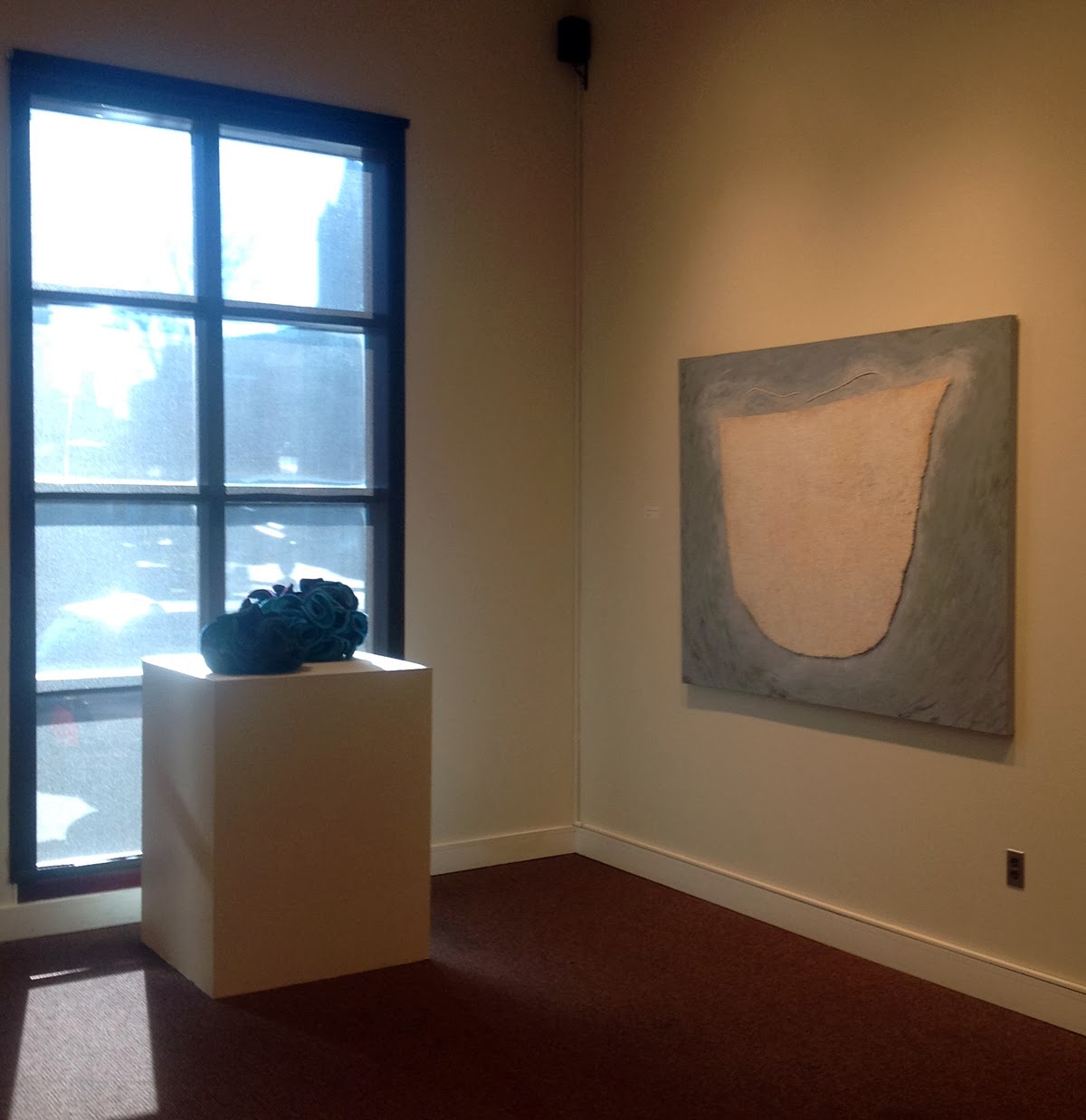 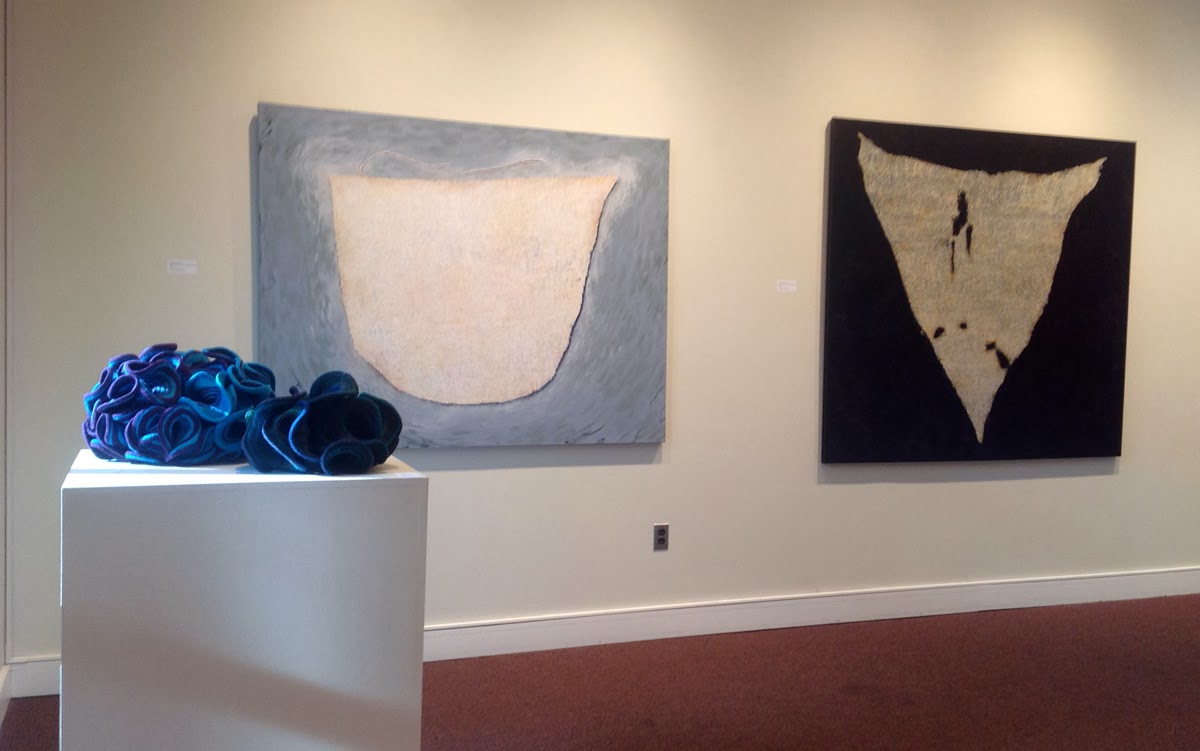 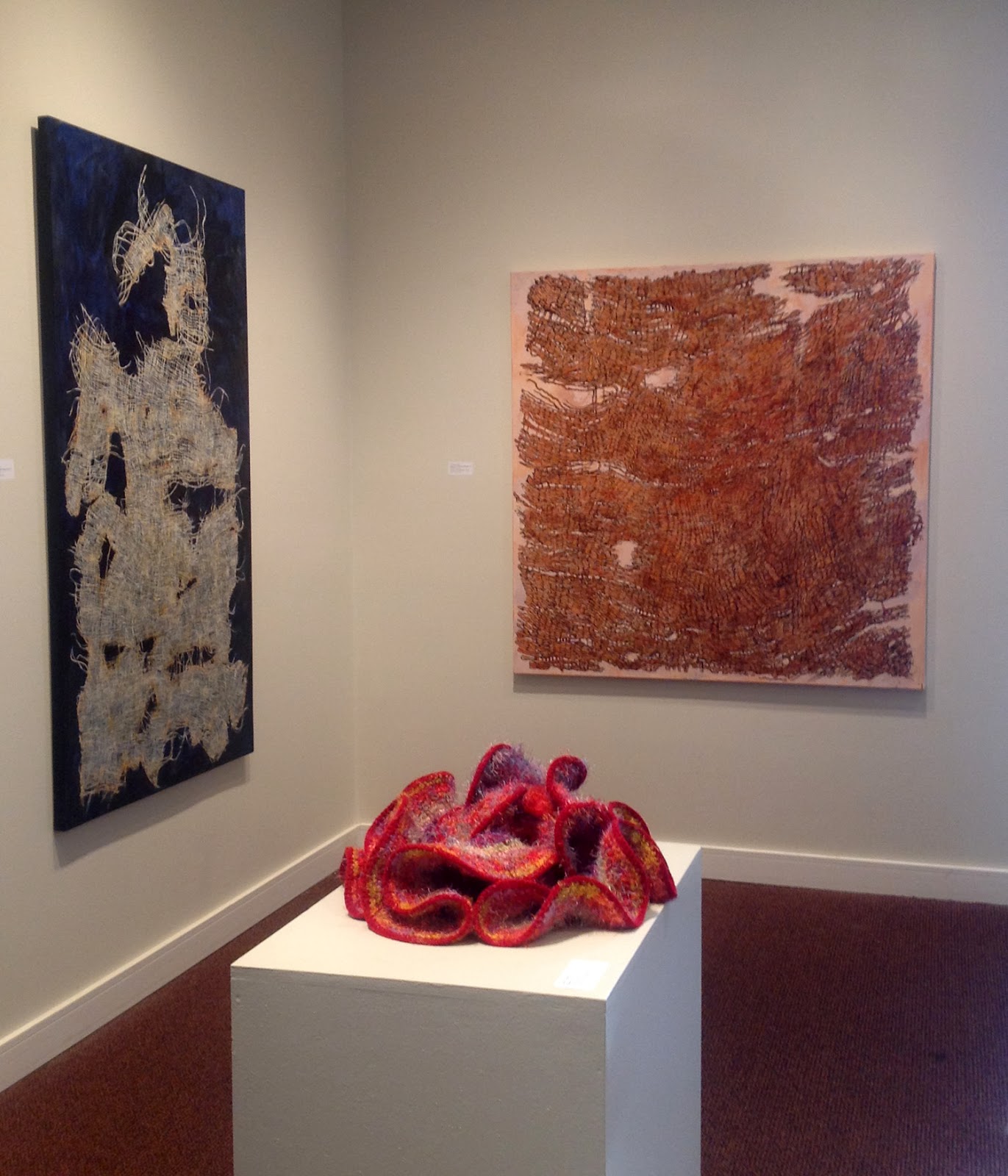 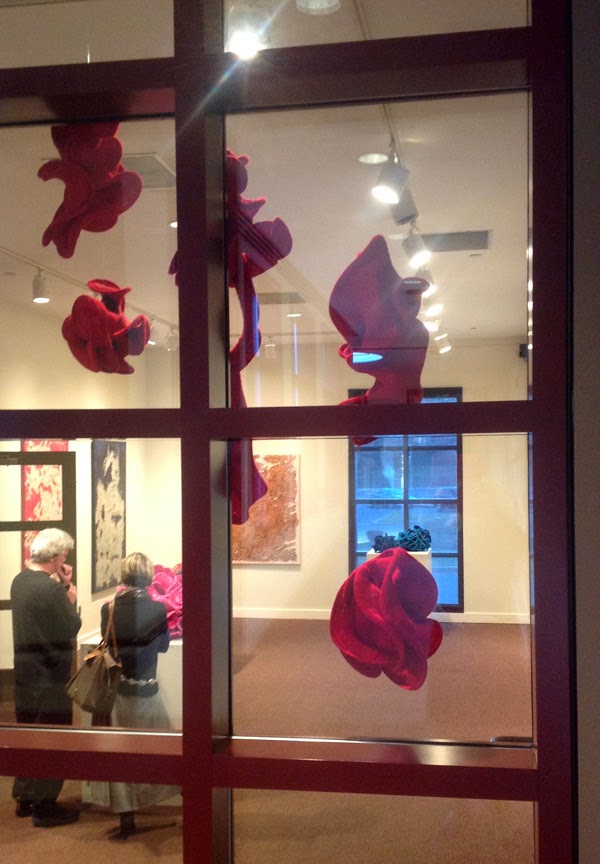 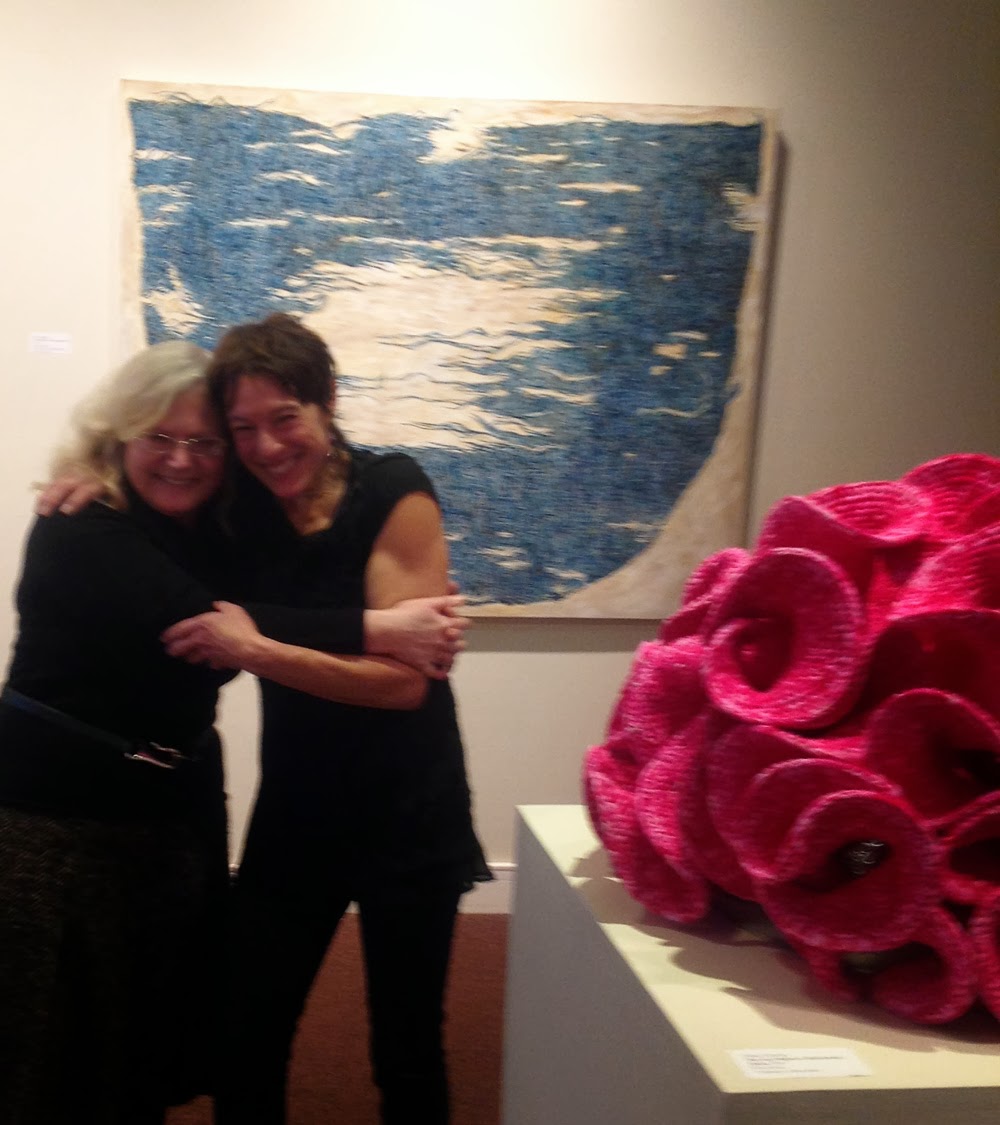 Posted by Daina Taimina at 6:57 PM No comments: Links to this post 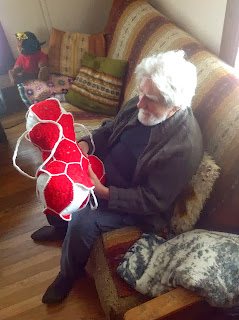 Here it is - a mathematician with stuffed toy.

It all started with this animation. Then I learned - it can be made with 24 heptagons. No problem - 24 heptagons were crocheted and then we both started to figure out what would be the best way to put them together. I followed David's suggestion and sewed them together in symmetric way. Then it was put away and when I picked up this fall again I wanted to stress this nice heptagonal tiling, so I put the white lines on the model. Since it is impossible to finish this surface in three dimensions I decided to add handles that would indicate how heptagons will fit together in fourth dimension. David was not happy with the surface because; It is not smooth! - that was topologist speaking. Can you iron it to make it smooth? We do have iron at home and I pressed all heptagons to make them smooth. As soon I finished doing it I regretted what have I done - yes, surface was smooth but it was not holding shape anymore! It looked like wrongly put together afghan.;-( David suggested to stuff it. And here it is - stuffed toy for the mathematician. 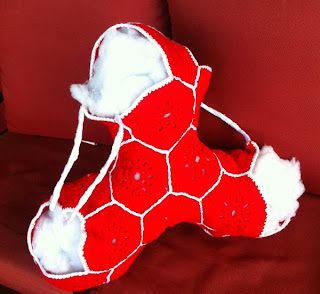 What is this surface? Klein quartic is named after Felix Klein who first described it in 1878. It is a compact Riemann surface of genus 3 with the highest possible order automorphism group for this genus, namely order 168 orientation-preserving automorphisms, and 336 automorphisms if orientation may be reversed.

Klein's quartic occurs in many branches of mathematics - some say it is one of the most important mathematical structures. Which mathematical branches use Klein quartic? Representation theory, octonion multiplication, homology theory, it was used to prove Fermat Last theorem... Sounds very complex - but you do not need to know all that to enjoy this nice stuffed structure!;-)

I would like one day to see artistic representation of this surface by Halaman Ferguson. His sculpture The Eightfold Way is at the Mathematical Sciences Research Institute in Berkeley, CA. It - is made of marble and was unveiled on November 14th, 1993- 20 years and two days ago!

The acquisition of the sculpture led in due course to the publication of a book of papers (Levy 1999), detailing properties of the quartic and containing the first English translation of Klein's paper.

Mathematician's toy made it to Scientific American blog
Posted by Daina Taimina at 11:08 AM 1 comment: Links to this post 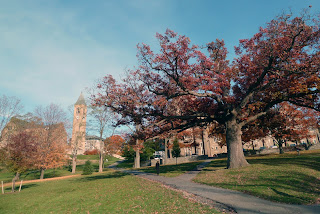 Over the first weekend in November the weather in Ithaca has changed to warnings of winter. Monday, November 4th afternoon is still bright and sunny but with significant chill in the air. Good reason to come to Rockefeller Hall Schwartz Auditorium to listen to Robert Lang who is visiting Ithaca. 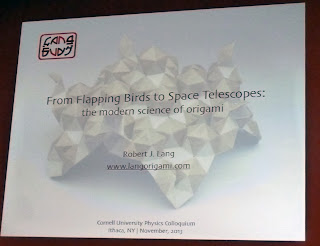 He is introduced by Itai Cohen who ends his intro by saying: " And now Robert Lang will show you what can you creatively do with physics degree."


Nobody really knows when origami started - it was (and still is) a popular past time activity for kids - everybody has made a boat, flapping bird or jumping frog at school. Earliest pictures showing folded butterflies are from 1680, pictures in 1734 Japanese manuscript let conclude from the complexity of origami that it was already well developed art. Well known around the world is Senbazuru origami based on ancient Japanese legend about the thousand folded paper cranes. The most significant in the art of origami happened in 20th century when Akira Yoshizawa developed the language of origami.

The next big step in origami happened when after 80 publications in physics and 50 patents in optoelectronics Robert Lang decided to turn to origami full time. The reason? It was physicists "instinct" that told him - origami must have underlying mathematical properties and it is time to find them. And he did.

There are four rules for creating flat origami:

1. Two colorability - which means if we map necessary creases, we should be able to color all regions in two colors so that no two adjacent regions are in the same color.

3. Odd and even numbered angles around the vertex has to be the same amount and add up to 360 degrees.


First 3 rules are easy to create, the fourth one is hard.

Whenever something is hard we want to know how hard. Pleats in origami are not all equal - they can be denoted true/false. That makes digital circuits of the folds, which turns into problem in mathematical logic - "not all equal". It is proved that crease assignment complexity (NAE-3-SAT) in origami is NP-complete.


If the flat origami can be so hard, then what about three-dimensional one? Robert Lang shared with the audience how he develops ideas of making 3-D objects from one sheet of paper - how the amount of paper for flaps is calculated, how the various regions are allocated on the paper, how to get from string figure which represents the object you want to fold to the number of flaps needed. These problems lead to discussions about intelligent design in origami which is connected with nonlinear constrained optimization. 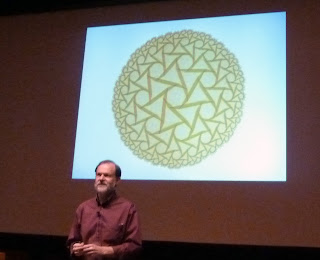 For my delight Robert Lang was mentioning folding of hyperbolic tiling and even 3-D printed hyperbolic paper which he used to fold "hyperbolic crane". Well, that crane came out with two heads... 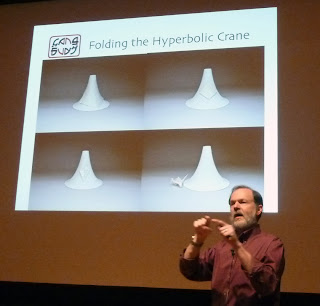 Once origami even led to "bug wars" - competition among the origami enthusiasts who can fold the most complicated bug. But are there any applications in real world? 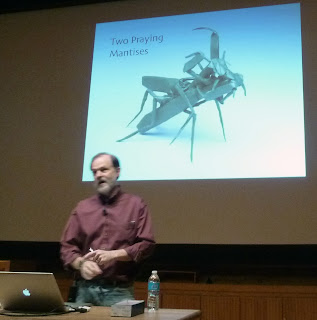 Miura-Ori origami folding pattern is used in space exploration. This folding pattern makes tessellation which allows for example to open a map just with one move. Here is how it works.

Origami is used in Solar sail - NASA uses it to observe far away planets. Of course, there is another agency which would love to turn it to the other direction...;-)
Heart implants, origami stents, protein folding, folding membranes... Paul Rothemund used DNA folding to develop cancer drugs which would be folded and unfold only when they have reached a cancer cell they should kill. 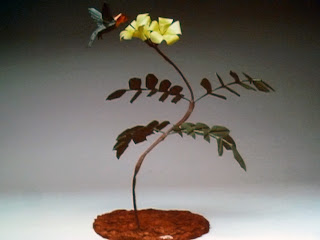 Origami is not an invented past time thing - nature knows how to fold - proteins, DNA, earwigs fold their wings. 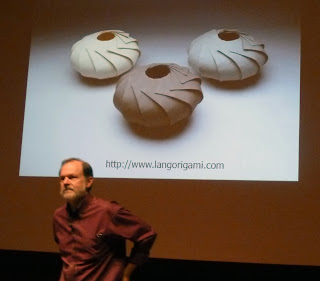 Posted by Daina Taimina at 10:30 PM No comments: Links to this post