Lots of geometry applications this summer- I collected here some what you may missed;-)
Please welcome Noa Raviv to 3D printing geometric fashion world! Interview with her and some more awesome designs are here. 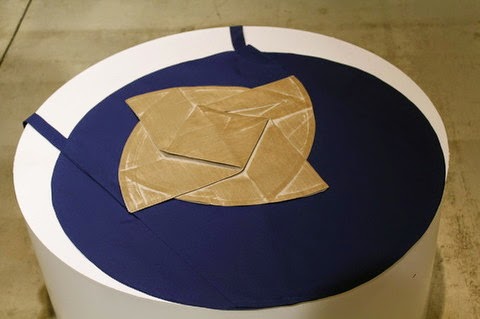 Issey Miyake continues explorations in geometry. Using “A Piece of Cloth” philosophy, which is based on the mathematical program with 3D geometric principles by Associate Professor Jun Mitani of the University of Tsukuba, 132 5. ISSEY MIYAKE creates brilliant and complex 3D forms that become 2D when folded.

DELTA collection is based on equilateral triangles. 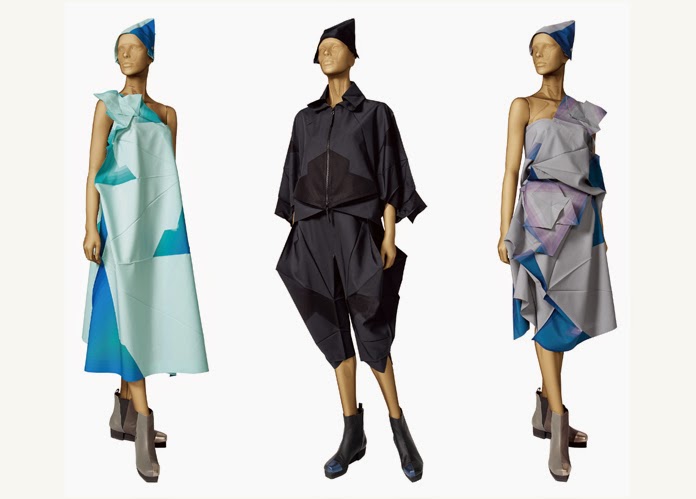 3D printing is changing the image of High Couture. 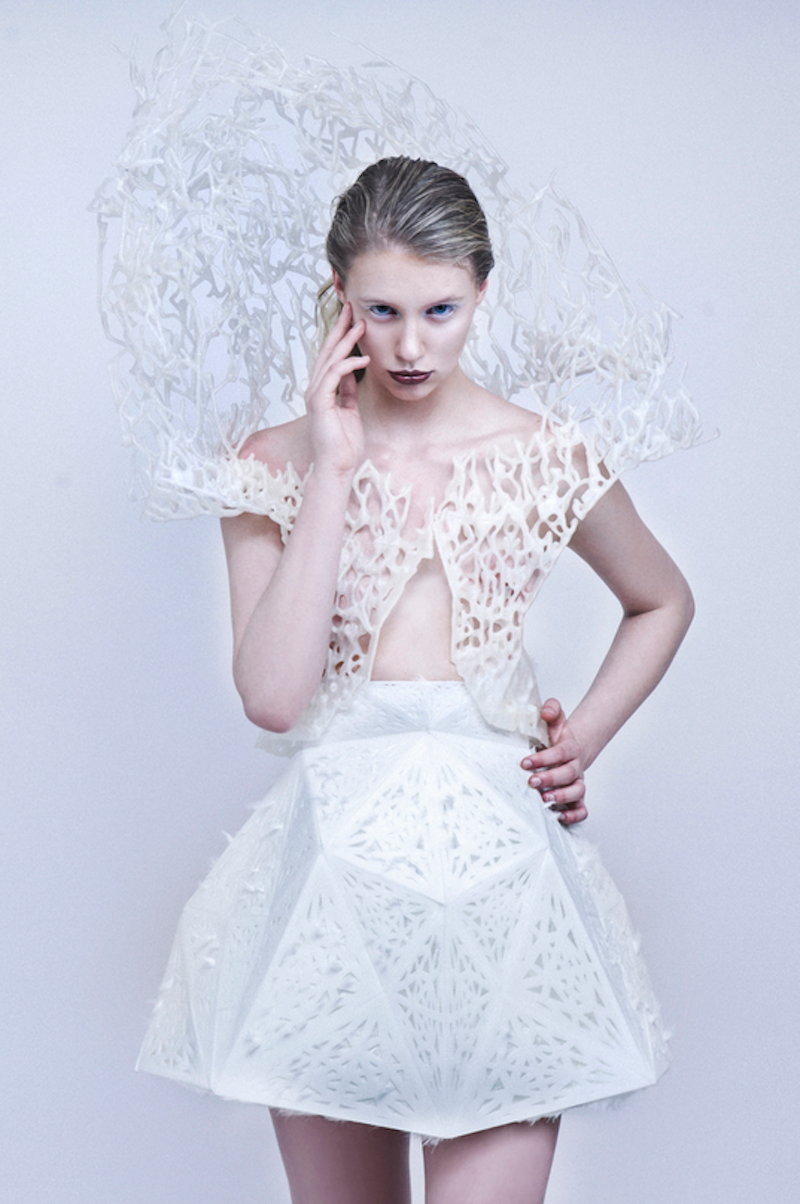 Georges Rousse has made a name for himself with incredibly complex pieces of geometric art that can only be seen from the perfect angle. His latest collection is no exception, which uses architecture, colors, and lines to create various optical illusions around an abandoned building. 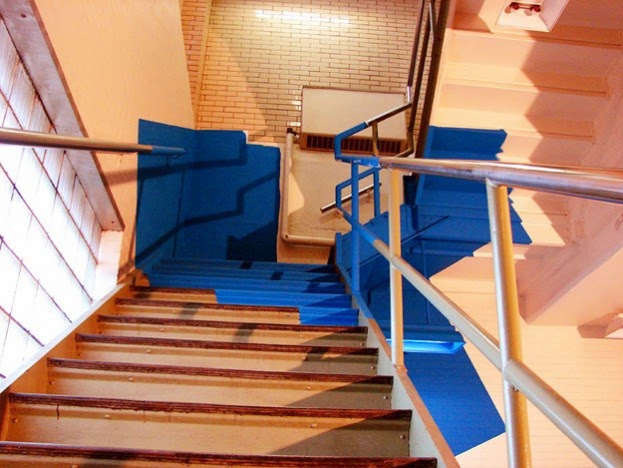 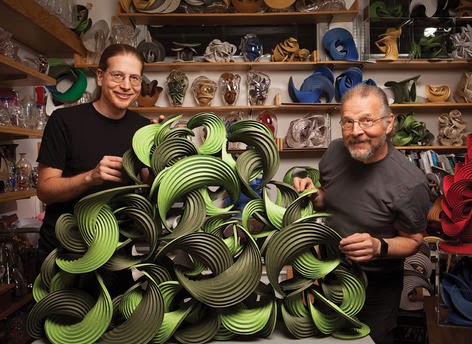 Remeber -in my Crocheting Adventures with the Hyperbolic Planes I mentioned work of Mahedevan, his work has inspired morphogenesis 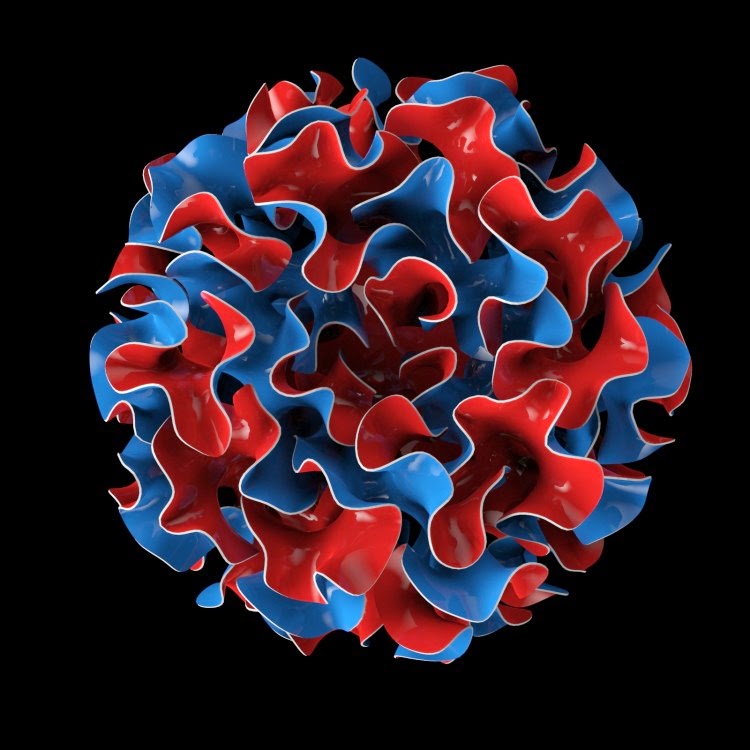 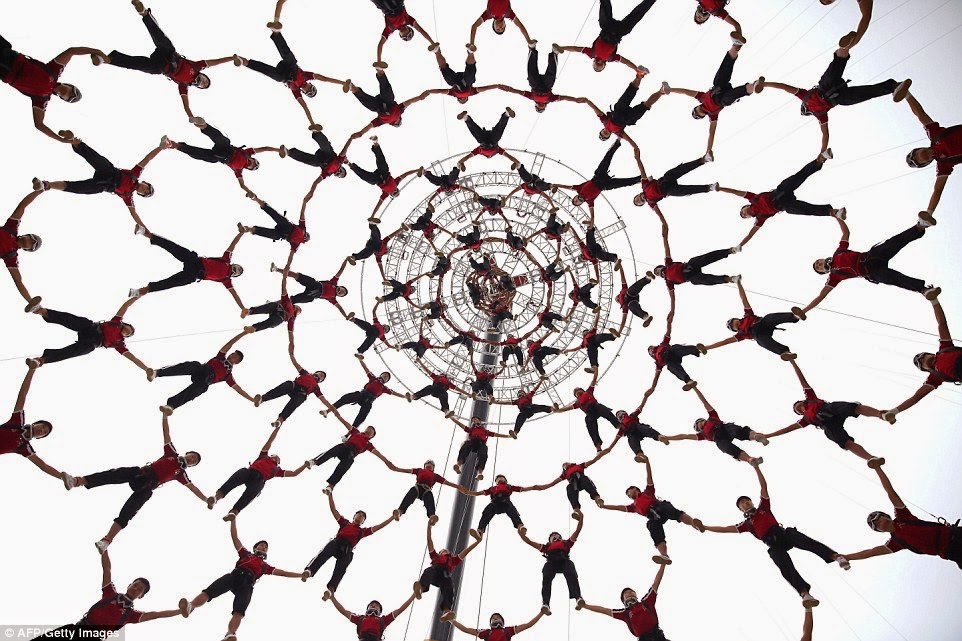 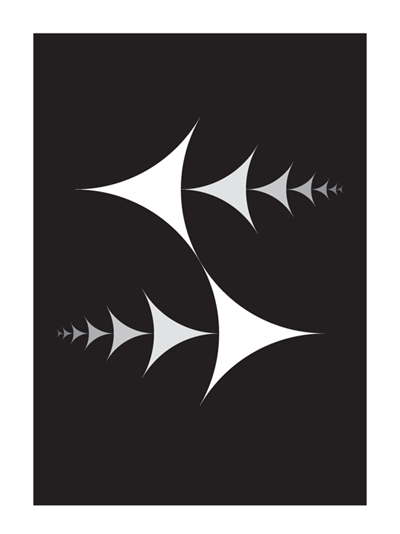 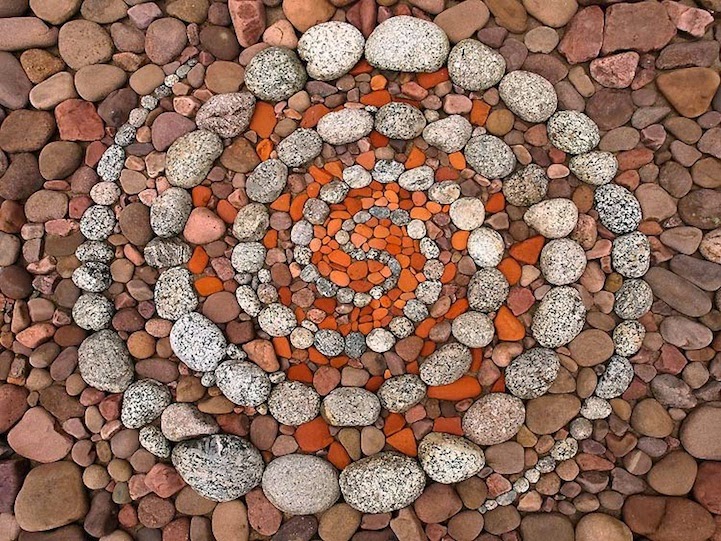 Dietmar Voorwold, a German artist based in Scotland, creates beautiful and temporary works of natural land art by arranging rocks, leaves and other natural materials into simple geometric patterns.
If you happen to be in London - go and see the exhibit Radical Geometry in Royal Academy! 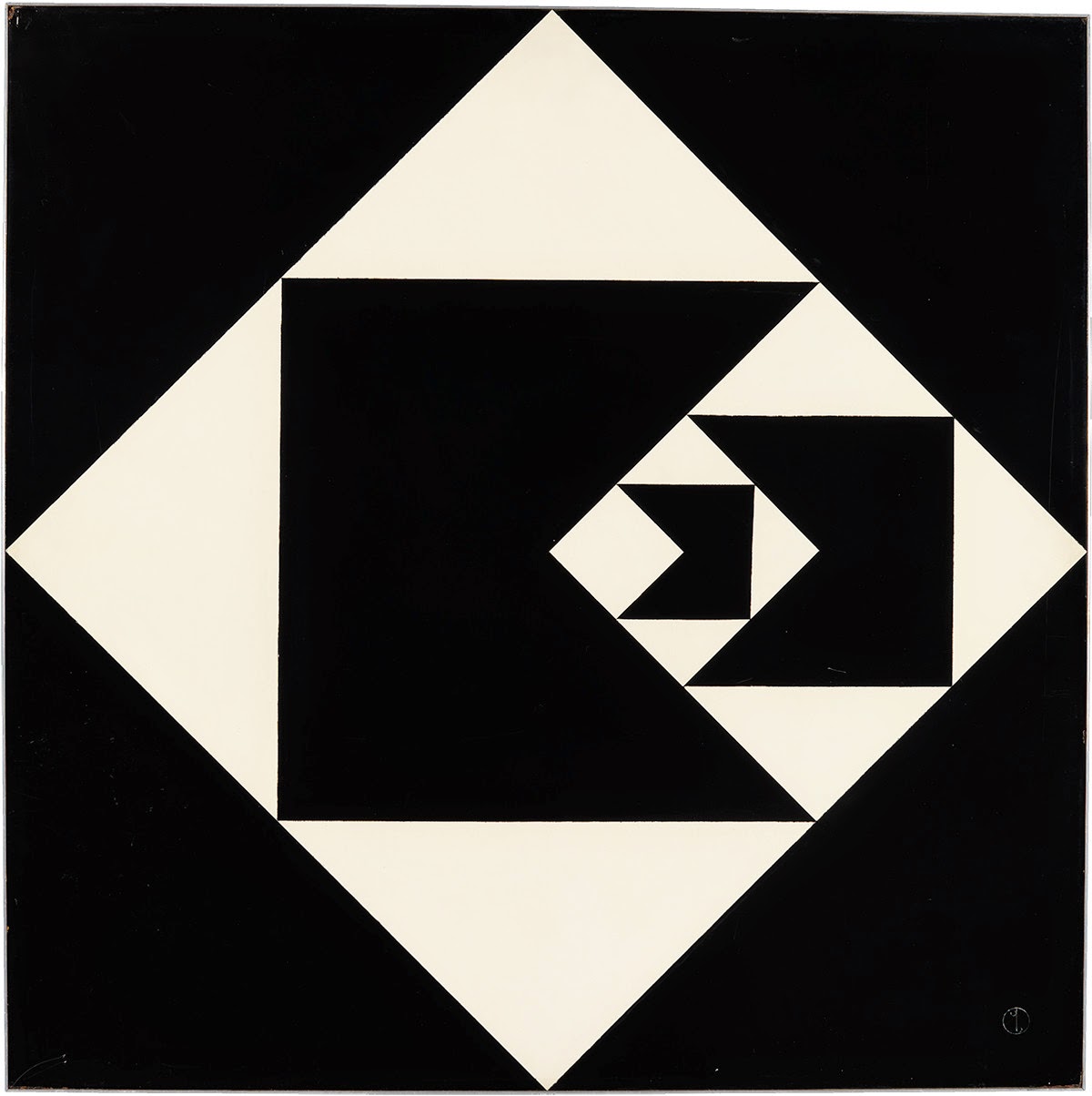 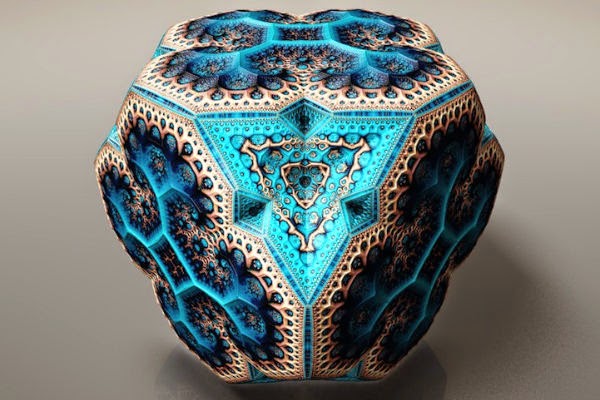 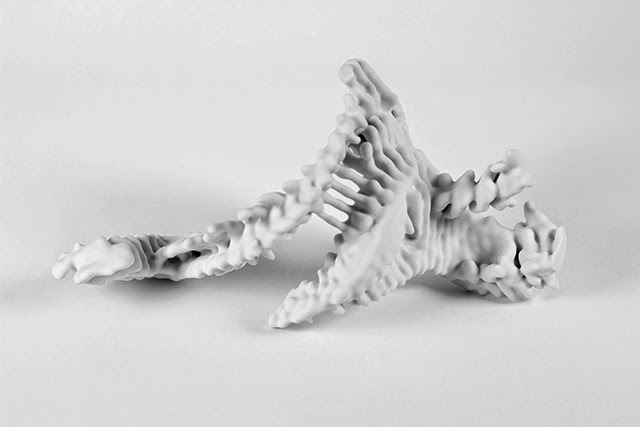 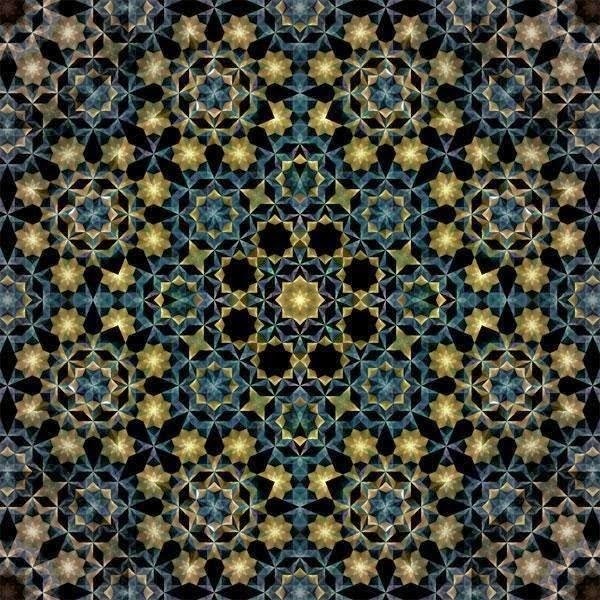 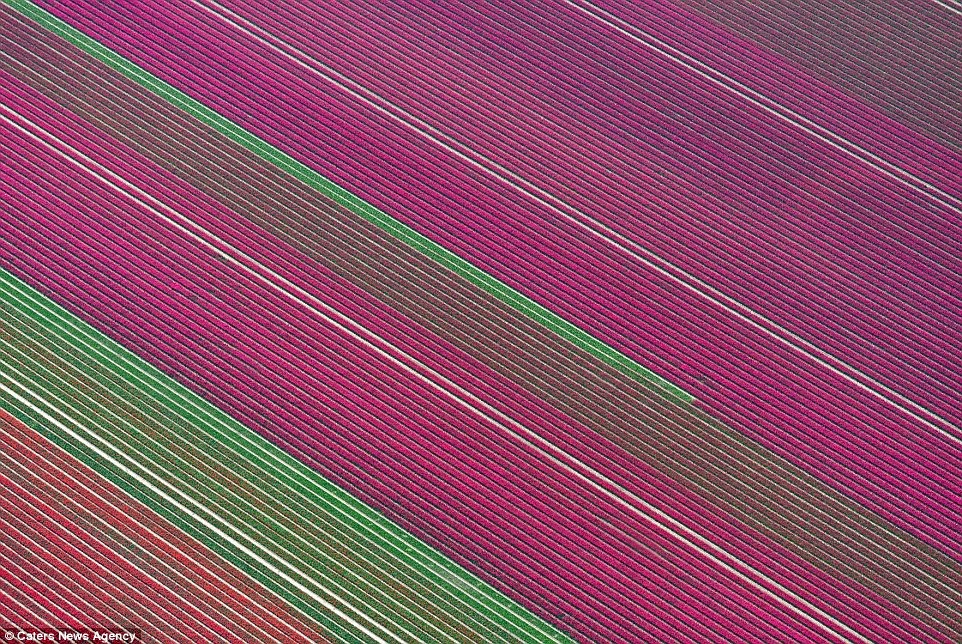 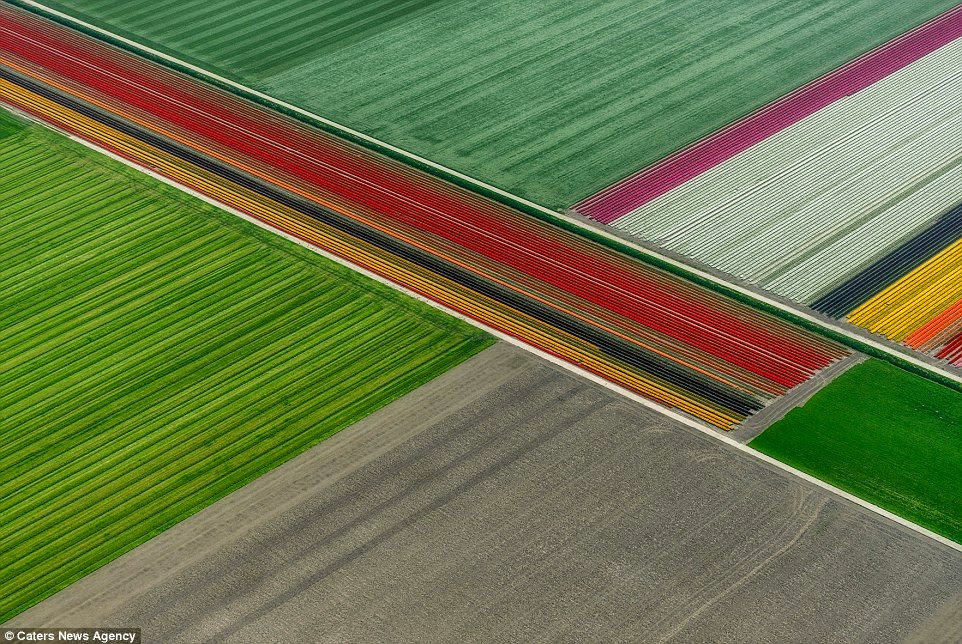 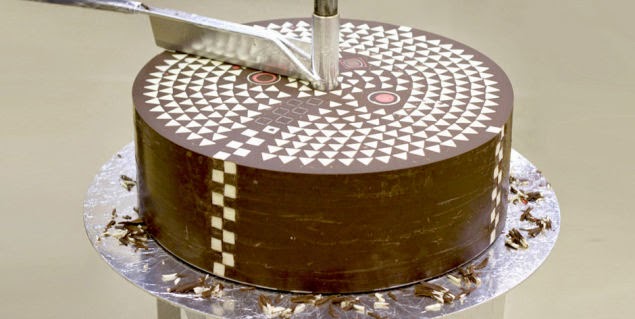 Posted by Daina Taimina at 3:26 PM No comments: Links to this post 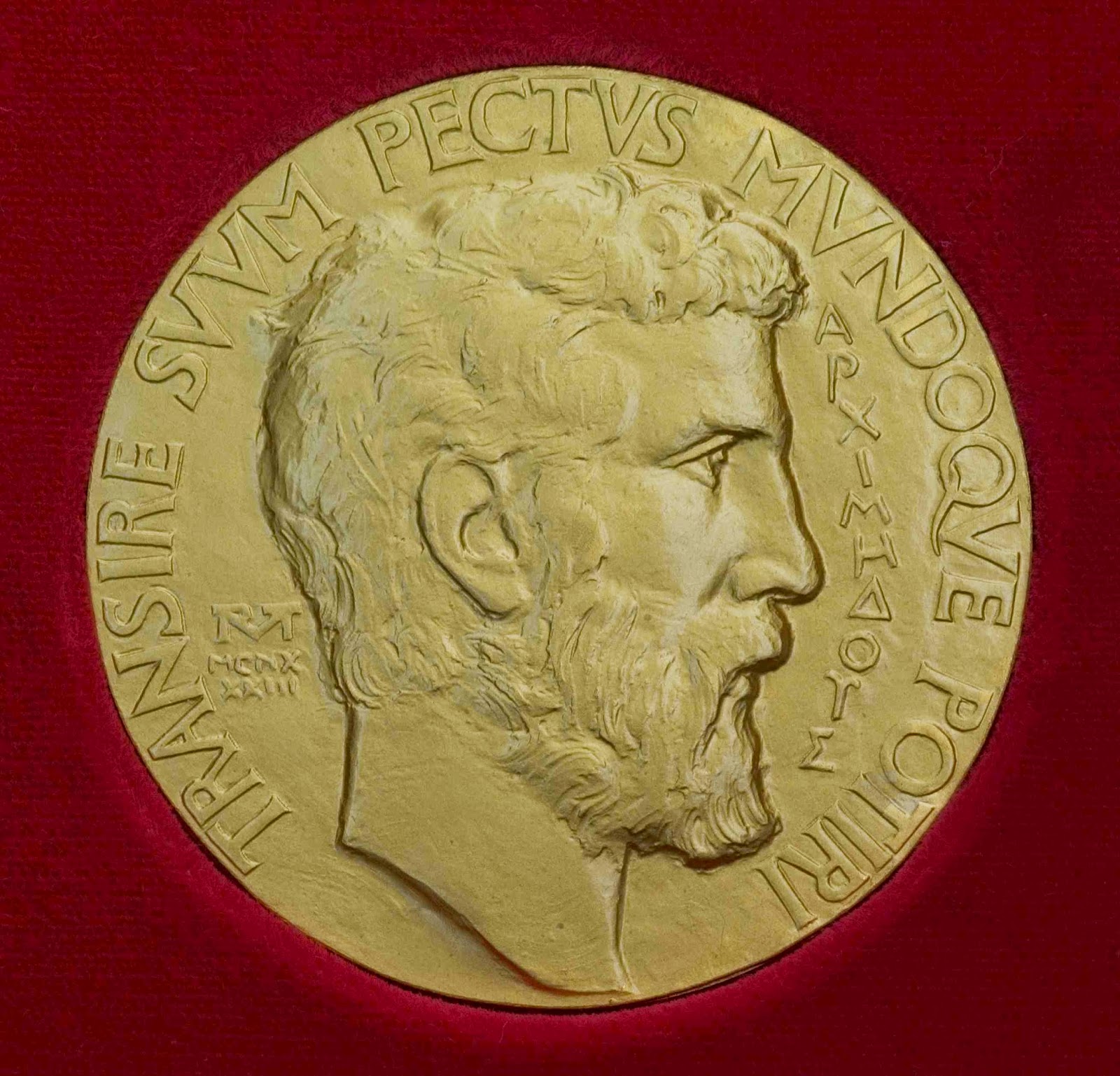 Shortly before the announcement of this year's winners of Fields Medal, there appeared the piece in NYTimes How Math got its Nobel - about Fields medal, essentially saying it cannot be compared to Nobel, it is politicized. Yes, it really cannot be compared to Nobel Prize - 15 000 Canadian dollars against 8 million Swedish kronor if you think in terms of money. However, it is the highest prize in mathematics, or one of the highest.
Fields' instructions about the medal were explicit: it was to be struck in gold; it was to be free of the name of any country or person; the inscription was to be in Latin or ancient Greek; it was to be awarded not only in recognition of distinguished research but also to encourage further effort. Fields did not stipulate any age limit. This was done in subsequent years by the IMU in a series of decisions culminating in the one taken at the Moscow Congress (1960) where an upper age limit of 40 was taken. The initial seed money for the medal came from funds left over from the 1924 Toronto Congress. But when Fields died, he left his estate to sustain it. In spite of his written instructions that the medal should bear the name of no person, from the beginning it has been known as the "Fields Medal." In sports we know who is the best, but Who is number one in math? Marcus du Sutoy has an interesting discussion there.
Now it is no more a secret who won 2014 Fields medals - they are:
Artur Avila - first Brazilian mathematician, Manjul Bhargava - first Indian mathematician, Martin Hairer - first Canadian mathematician, and Maryam Mirzakhani - first ever woman to receive this honor.
I love this picture:
No Americans among this year's Field medalists - so was the piece in NYTimes coincidence?Which competition these days is not considered political?Iranian president tweeted about Mirzakhani - this tweet has also sparked political discussions. Some bloggers also try not to be too excited about Fields medal like
I love math and I hate Fields medal.
Terry Tao in his blog gives an explanation of the mathematics of Fields medalists 2014.
Of course, there is a lot of press now about them. Somehow less in press are discussed other prize winners. As my background is in computer science, I am always excited about Rolf Nevannlina prize winners. This year it is Subhash Khot. Typically, major math prizes are given for major results. But in this case, Subhash Khot is receiving the Nevanlinna Prize in large part for a conjecture – and even more
surprisingly, one whose truth experts can’t yet decide on.

I found through Twitter two mentions Mirzakhani's work that were mentioning me:  by Annalee Newitz and Ian Sample. It was a surprise for me because I never met Miryam or corresponded with her. I am not a research mathematician. How could possibly I could be linked with her? Both writers tried to explain Mirzakhani mathematics to general audience and one of the things they used - crocheted hyperbolic planes! I am happy that they have served for exactly the purpose they were created - to make hyperbolic geometry accessible and easier to explain. I am not sure though that Mirzakhani used anything like that. She has been quoted as mostly drawing pictures on large piece of paper. Her little daughter thinks that she is painting. But something familiar I saw in her pictures - here is a screen shot: 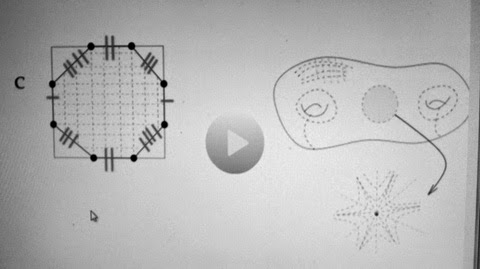 Yes, indeed - those are "hyperbolic pair of pants" - term coined by Bill Thurston. 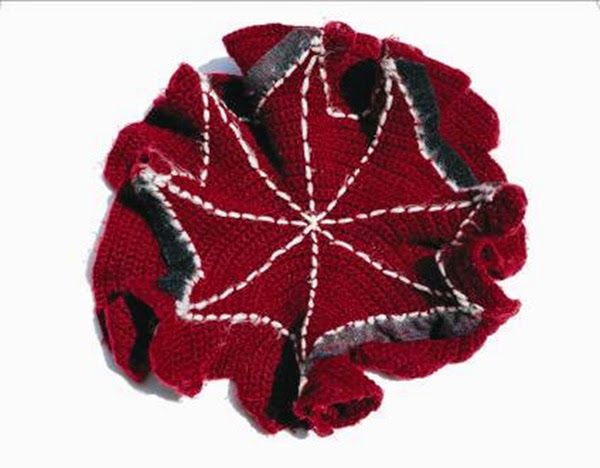 But please - do not ask me to explain Mirzakhani's results further than this! :-)

Posted by Daina Taimina at 4:16 PM No comments: Links to this post