Hyperbolic Guitar and some new photos

Now there is "hyperbolic music". I was very delighted to learn about this piece, hope you will enjoy it too. While listening to it, look at some my new photos.

Donal Donohoe says about creating this music:
The piece is an attempt to capture the exponential expanse of hyperbolic space in the rhythm of music. Exploring the relationship between hyperbolic geometry and music, this tune was composed after attending a lecture about hyperbolic geometry by Dr. Daina Taimina at the Science Gallery, Trinity College Dublin.
More explanation is on his blog
Hyperbolic Guitar on YouTube 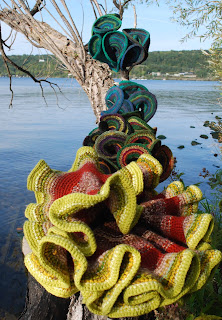 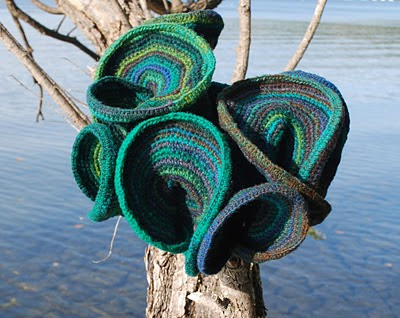 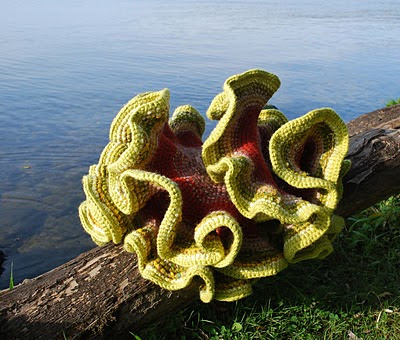 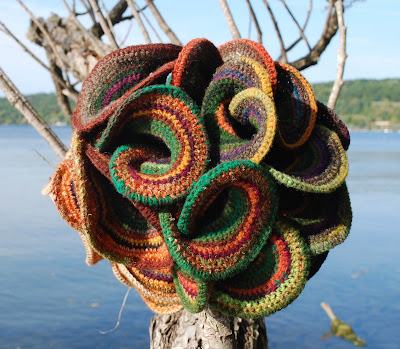 Posted by Daina Taimina at 8:40 PM 2 comments: Links to this post

Talking and writing about math

Recently I met Gabby - Gabriele Mayer was visiting Ithaca several weeks ago and showed me how my hyperbolic planes have inspired her. I am really fascinated with her work (or may be proud that I could inspire something like this?or both? :-) ). Just look: 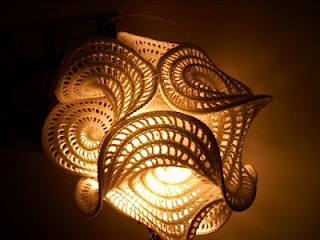 and here is more on her webpage.
In turn, she inspired me to do something like that to my own work and here is a result: 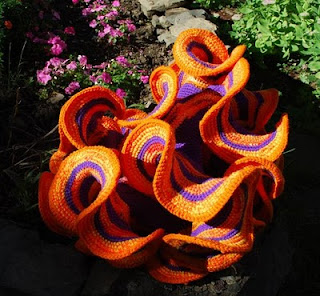 I am waiting for leaves to turn more in fall colors to take pictures of few other pieces I finished.
With Gabbi we were discussing not only about crocheting hyperbolic surfaces but also how to talk and teach mathematics to students who have "math phobia". We both had an experience that these crocheted surfaces somehow open up people, may be it is crochet as a medium which makes math more tactile and less scary.
Still there are mathematicians who think that not anybody can understand deep ideas therefore there is no use to talk to somebody outside mathematics about these ideas, and there are science communicators who are trying to explain mathematics accessibly but doing it through oversimplifying and as a result perpetuating misunderstandings or simply making mistakes. Some say - it does not matter what are you saying to general audience, they will not understand anyway and they don't care. I disagree with both extremes. When I am talking about mathematics, I do it with a great respect to my audience and it does not matter whether they are people in local library, yarn store, children of various ages in Exploratorium or fiber art enthusiasts on MIT campus. It is much easier to talk to professionals in your field than to people who are unfamiliar or have very little previous experience with what you are talking about.  In case of mathematics - had experience but often unfortunately it has been bad.  And it has been bad because they had teachers who thought if you cannot follow me you do not have math aptitude or skills and I am not waisting my time to try to explain all that math to you - you won't get it anyway. I am happy that people come to my talks not only to see these various crocheted forms but also to learn what is behind them.
Last Monday Steve Strogatz was talking about "How to write for New York Times". It was about his experience of writing 15 columns about mathematics for New York Times web version. They became very popular. Harvard Business Review called him "the best NYTimes business columnist you never heard of".
Since the talk was in physics seminar (well, I was finding it as a significant fact...), Steve Strogatz invited everybody to be in "full physics mood" - to ask questions, actively participate in discussion and he was asking a lot of questions to the audience. His first questions to the audience were - what would you do in my place if you would be offered to write these columns? How to choose about what to write? To whom you would write? Somebody said - to people who read NYTimes. But who are these people? They are intelligent, most of them well educated, know a lot(or think so since they read NYTimes:-)). One could write towards students - Strogatz remembered nice question one kid had asked him about infinity - is it odd or even? Somebody in audience said ( I did not see who but had to be a mathematician):"to make them like us". Somebody suggested (also a mathematician, this time I did see):"We have to explain accessibly mathematics to all our students in order to influence future voters - they will become ones who will vote to give or not money for our research." Very good pragmatic point.
Strogatz added himself - I could wrote for skeptics to show the point of mathematics and then quieter added - if there is any, which made audience to laugh. He decided to write these columns as for his friend who is an artist and loves math and wants to understand it but has gaps in his knowledge. He choose to follow advice from famous mathematician who at some point was teaching in Cornell Mark Kac:
"In teaching math you should tell truth and nothing but the truth, but not the whole truth."
I think it is a very good advice to follow - to tell truth, even if you are talking about mathematics :-). And if there is something which is too hard for the audience - be honest and tell the truth. I am not afraid to say - I do not know. Because I know that there are more things that I do not know than those I do know.
I mentioned my talk in MIT. It was a nice trip to Boston - I planned so that at least finally I could be also a tourist there! My talk was in famous Stata building. There are many nice pictures on web of it but here are some of mine: 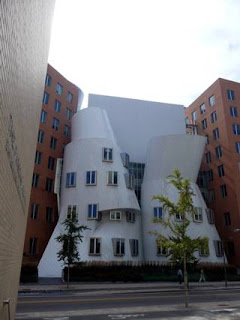 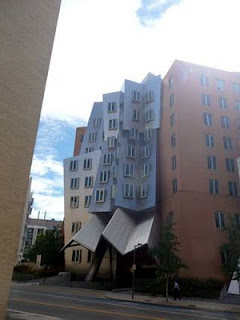 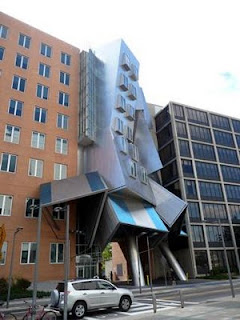 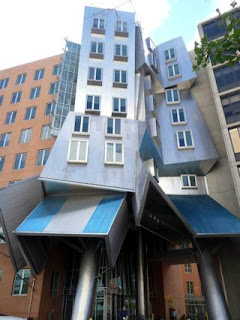 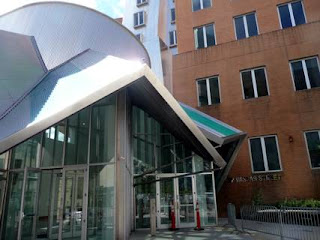 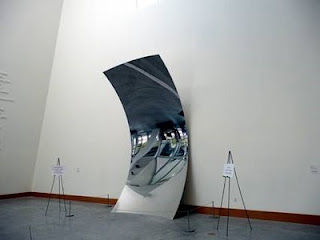 My talk was in the auditorium 123 which somebody told me is the nicest room in MIT - I was very happy about that. The auditorium has 300 seats which I was not expecting to be filled on Friday evening but there were definitely less empty spaces than I thought. The first thing I noticed walking into this room was very professional - so much blackboard space....And screen when you want to use a computer projector does not cover writing space. Since we were driving to Boston I could take with me a lot of models - I am trying to avoid carrying models on airplanes in checked baggage after once my bag with models was lost for 3 days. You may notice in one corner that I put out crocheted shawl - since this was a group of mostly knitters I wanted to demonstrate that I can crochet not only hyperbolic shapes and I am wearing a vest I made. 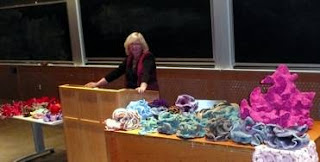 I liked the audience during my talk very much  but it is always my favorite time when after the talk all come to see and to touch and to talk  with me. 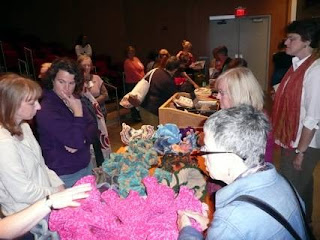 I do not mind for somebody to find new applications of my work. 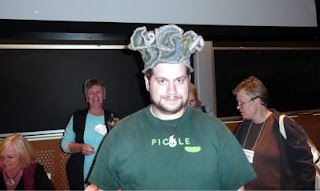 I had a special interest in Cambridge - to go to Peabody Museum and to find the sailing maps or navigation charts of Western Pacific made by native people. 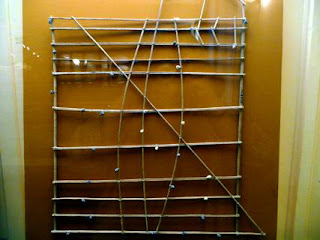 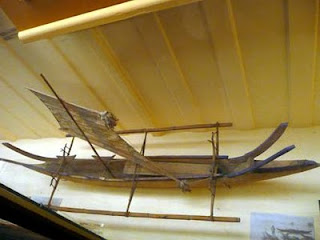 In the same hall I really enjoyed various patterns on crafts - I am collecting pictures of patterns in various cultures for my rpoject to write about them: 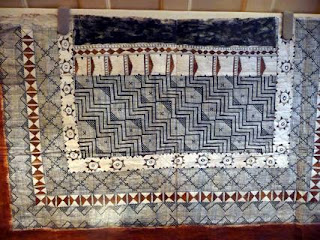 Peabody Museum is connected with the Museum of Natural History which would be very interesting to see but we were running out of the time - we visited Harvard campus before my talk. Still I decided to give up plan to rest in my comfortable hotel room before a talk in order not to miss the glass flowers collection.
The collection represents more than 830 species all made of glass...It is really beautiful. 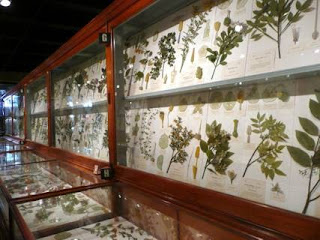 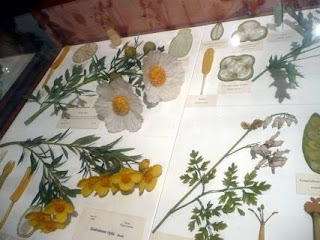 Some of my tourist's images of Boston: 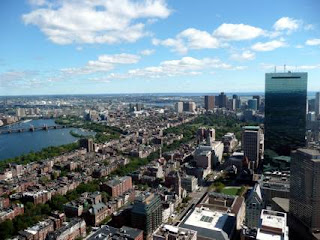 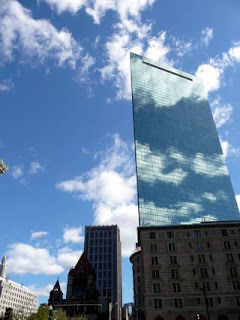 We were lucky to have a perfect day to see Hancock Tower exactly how it was designed to see it.
On Copley Square one place not to miss is this: 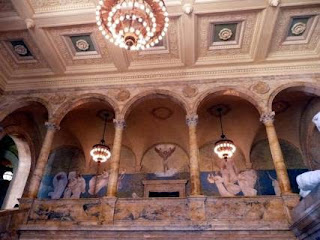 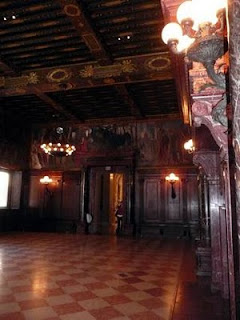 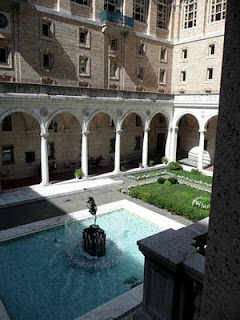 Isn't it make you think you are in some palace in Italy? Would be very nice to spend some time in it and people do 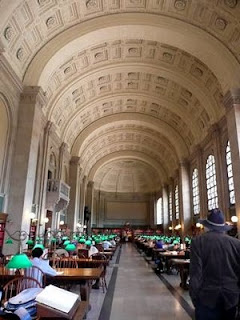 Indeed Boston Public Library looks like a palace and I was glad to see that there were quite a number of people using a large Reading Room on Saturday afternoon.
The trip to Boston was great but there is always some inevitable disappointment. This time it was here: 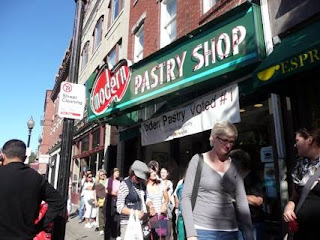 I have spent enough time earlier in my life lining up for bread, butter, meat,.... Out of habit to do it now, so this pastry shop thought voted #1 in whole country will have to wait for me. May be it was exactly what I needed for my health - lots of walking and no pastries?
Posted by Daina Taimina at 11:33 AM 1 comment: Links to this post

Posted by Daina Taimina at 11:51 PM No comments: Links to this post