not getting away from mathematical models

I remember first seeing string models when I was an undergraduate - once our instructor brought them in analytic geometry class. When I started to teach in the University of Latvia and got to teach the same geometry class I searched for those models in math department and found couple of them and damaged. I offered students a chance to repair those models instead of final exam. Two guys took the offer. In order to get a credit for the final exam they had to turn in fully repaired models before the exam starts. On a day of the exam they came in classroom the exam will be given five minutes before it looking exhausted and sighed: - We made it, - and turned in two repaired models.
- You knew it! - they exclaimed. - We took the offer thinking it will be easier than the exam but it turned out we had to study properly how these models were built and what they represented, all the math behind them...
I still remember this as one of my favorite teaching moments :-)
Those string models were just of ruled surfaces and only one had a moving part. I do not have photos of them and have no idea what has happened to them over the years. I first remembered this story when I saw string models in the exhibit Beyond Measure in Kettle's Yard gallery, University of Cambridge in 2008.
Since then I have been looking for those beautiful models everywhere I can see them. The following ones are few on display in Henri Poincare Institute in paris. 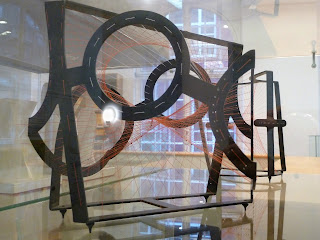 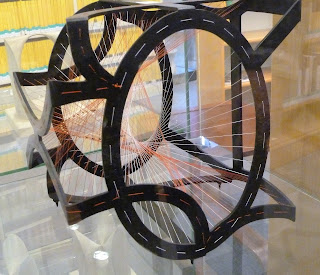 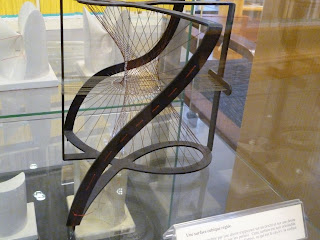 During my visit I also saw in a storage at HPI several that needed repairs - or may be they are already repaired? If not, I would be happy to volunteer and also learn more about the history of these models. 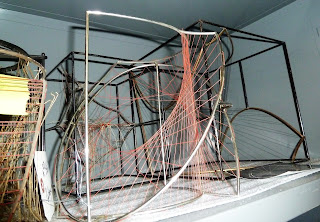 It appears that there are string models in Ithaca, on Cornell campus. They were discovered packed away in storage. Those are copies of famous Olivier models.
The French mathematician Théodore Olivier (1793-1853) created string models between 1839 and 1853 to teach and demonstrate descriptive geometry, some of which could be manipulated. 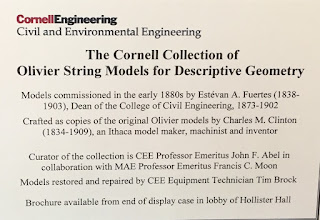 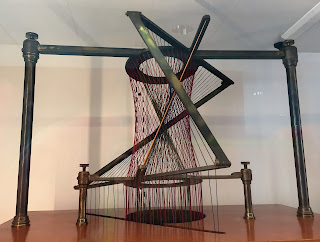 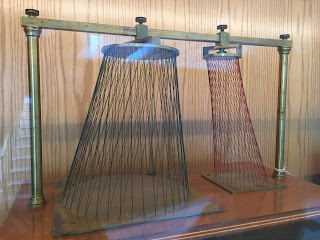 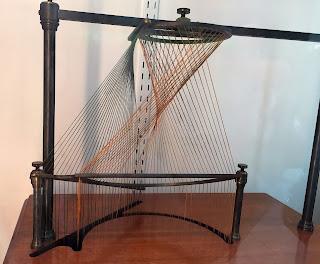 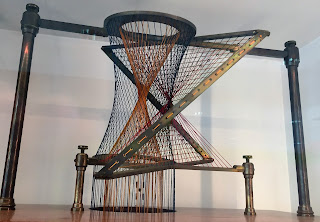 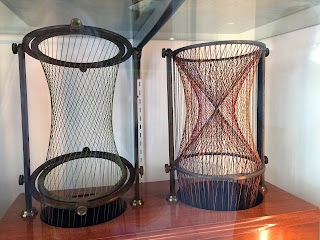 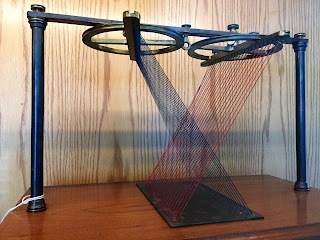 New design of soccer ball is another inspiration to explore mathematics behind it. 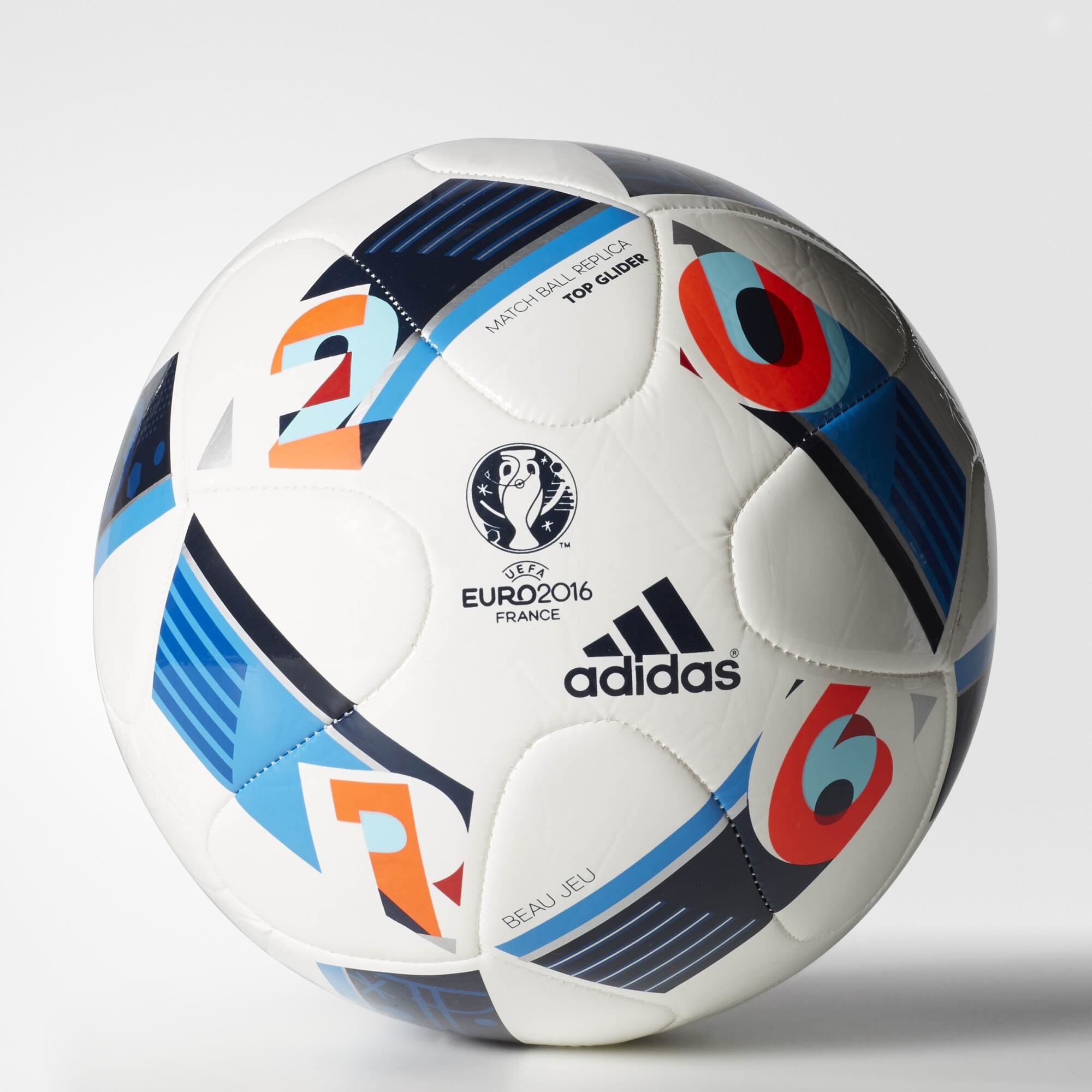 We read that it is based on cube, so we had to check it out and build it. 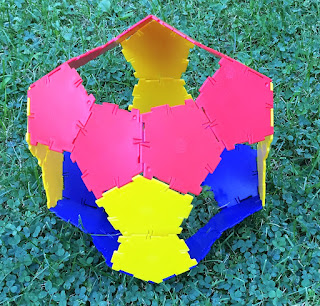 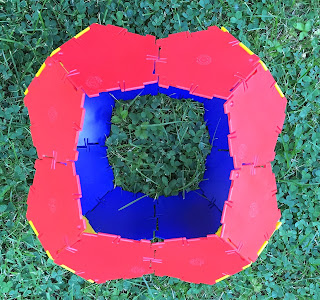 More about soccer ball math here: Soccer ball symmetries
One ball to rule them all

Another experience with math models was using The Principled Block. It seemed like a nice idea to get something without any instructions, particularly if it is appropriate until the age 116 - who knows, may be playing with it will help to reach that age? 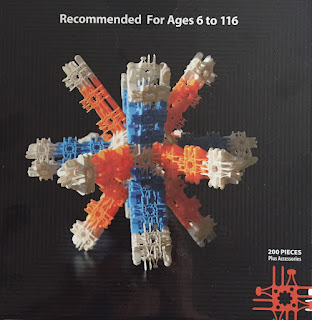 We both with David went on to see how easy it will be to use these blocks to build polyhedra. This is what we got: 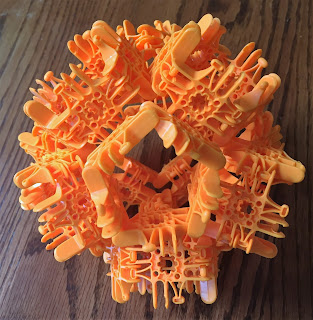 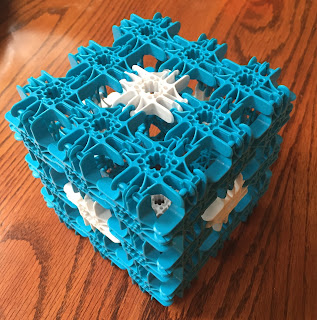 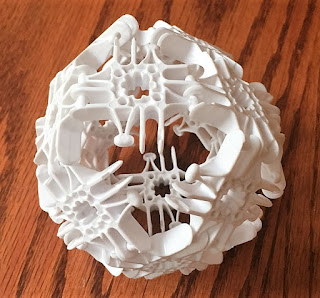 And finally and I would say the most exiting news for me was to learn about connections between quantum complexity and negative curvature. In 2005 when R.Freivalds spent summer in Cornell I mentioned to him that there could be a connection, I just have my feminine intuition but no knowledge to find it. He did not seem to buy that idea. However in 2014 when I had my big exhibit in Riga, Freivalds came with a group of his graduate students and asked me to explain them properly about the surface with negative curvature. When I first saw a tweet that the paper
Quantum Complexity and Negative Curvature by Adam R. Brown, Leonard Susskind, and Ying Zhao is online, my first thought was - I am so sorry Prof. Freivalds I cannot send you an e-mail anymore ... 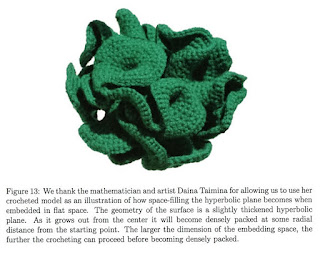 Posted by Daina Taimina at 10:53 AM No comments: Links to this post