Math Babe on the Weapons of Math Destruction 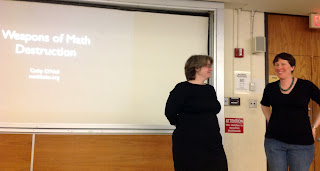 Feels strange that now I will be writing a blog entry about a blogger. Yesterday Cathy O'Neill or MathBabe gave a talk in Oliver Club at Cornell. In a picture - Tara Holm is introducing Cathy.
When you are not in academics one can give talks with sexy titles and become a public face of mathematics. What Cathy does is best to learn from her own blog Math Babe. What she was talking about yesterday was more like recruiting new math PhD's to her boot camp to learn more about conscious modelling.
Mathematical models are all around us and while mathematicians recognize them, general public does not always see how math is used against them. Starting already in school people are trained that "this is math - you will not understand". This phrase is fashionable to use instead " I don't care to explain it to you even if I understand it." It is so often that a number becomes your characteristic - google search results, your credit score, GPA, SAT score, Predictive models are used based on sometimes questionable data and data interpretations. Those are not oracles but non-mathematicians trust them because - if it math it must be true. Mathematician is always questioning these results. mathematicians are mostly honest people, they easily admit if they are wrong. I proved a theorem! No, you have a flaw here. Oh, really? OK, I should work harder, no hard feelings. This is not routine in other sciences.
Banks are underestimating risks. They are making us to believe that they are following a normal distribution. Investment banker will show you something like this: 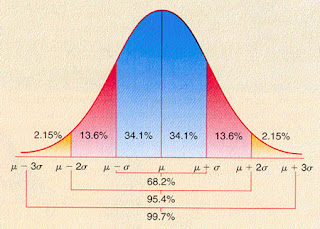 In the meantime "banks too big to fail" actually have this: 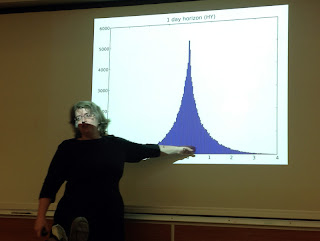 Quite a different picture! 95th percentile makes everything look good. So what the PhD's on Wall street do? Push the risk in last 5%.
Data are screwed in many places. Let's take teacher evaluation. When Bloomberg wanted to be elected as mayor of NYC, tests were easier and test scores went up. Teachers are often evaluated for things which are out of their control, for example, student attendance. Standard teacher evaluation punishes teachers in tough schools. The value of standardized test scores are so much overvalued because it is a huge business, so those who are in control of preparing tests, push importance of those tests.
Example of data for some teacher evaluation: 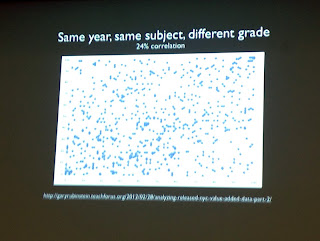 Any mathematician will tell you that there is no correlation among these data, but nevertheless administration will pull out "valuable" evaluation data.
So what Math Babe proposed mathematicians should do not to let math be abused and not letting people to be abused by math? 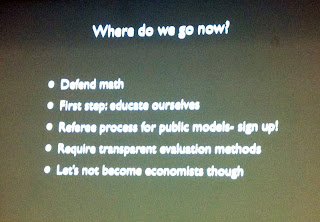 Cathy raised many interesting questions, was open to questions from  the audience, but also was good not really answering some of them. Afterwards though anybody could go and talk to her in more details.
But of course - read her blog to learn more and as mathematicians we should be responsible for educating general public and stop using math as abusive tool in hands of those in power.
Posted by Daina Taimina at 9:05 PM No comments: Links to this post