Second edition is on its way! 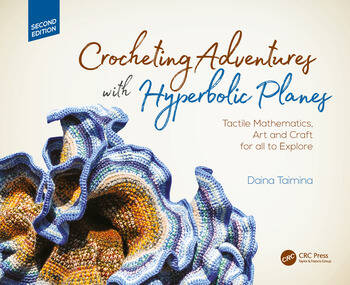 No posts last year - I had drafts but never finished, Here is my excuse - second edition of Crocheting Adventures has gone off to press and official release date is February 26. The first printing of the original book was the best quality one. So if you prefer first printings of the books then pre-order. I was told that the first printing is ....Well, let us say small. I hope it will run out fast and there will be more. However, the print shop after just seeing a manuscript already asked for the permission to print a few extra copies for their display library because they said - it is a beautiful book.
Is it different from the 1st edition? Yes and no. The content is updated, many pictures that were left as placeholders and afterwards due to time constraints never replaced now are replaced. The chapter about applications of hyperbolic geometry is expanded, new chapter about my adventures after the first edition was published is added. Appendix now is much larger with pictures to illustrate how to make models, and yes, there are more models - step by step instruction for hyperbolic pair of pants, Klein Quartic, Costa surface, Figure eight knot. This book is celebrating 20 years (I cannot believe this number!) of hyperbolic crochet. I took more pictures with my models in nature, and last picture in the book is at the Ithaca Falls - the picture for the first edition was taken there in January 2008 and that is at the beginning of the book (Contents page). I carried again the same model which is now much larger to the same place in January ten years later when in Ithaca it was so cold that falls were frozen. 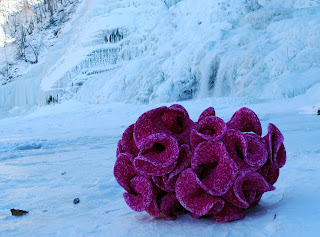 The book can be pre-ordered on the publisher's page, on Amazon, on Barnes and Noble.
Please suggest this book to your library to make it available to more people!
And - if you still want to have 1st edition - on Amazon right now it has good discount price.


Posted by Daina Taimina at 3:53 PM No comments: Links to this post