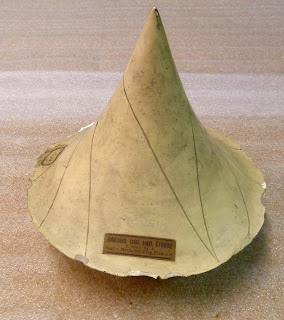 When in 1977 I started to teach geometry in the University of Latvia, there was a small collection of old mathematical models with their titles in German on little uniform signs attached to their sides or bottoms - some plaster models and some were string models. All we knew that they were from early 20th century. I remembered those models used in geometry classes when we studied quadratic surfaces. With computers more and more becoming a part of teacher education, the use of the models became old fashioned and they were neglected. Nobody objected when I collected what was left of them and displayed on a shelf next to my desk in an office I shared with three other people. (oh, that office was a big improvement - for my first 5 years as a faculty I shared a desk with two other people...). By then the string models were damaged and the plaster models looked quite sad also, but I still enjoyed to look at them as to little sculptures. I even tricked one of my students to repair one of the string models by promising to count it as a final exam for the class. He happily agreed thinking that he got a good deal. When he arrived in my office 5 minutes before the final exam - as was the deadline for turning in his work - he said: "You knew it! It was easy to take it apart but in order to put it back together correctly, I had to study everything about those surfaces! Well, now I really know them."
When I last visited my former office in Riga couple years ago, models were gone and nobody knew where.
I remembered those models in Latvia  when I saw some mathematical models on a shelf in Cornell Mathematics Library. When in 2002 I joined a team in Cornell to develop kinematic model digital library, I discovered that some of the models in the kinematic model collection were purely mathematical and I became interested in the history of models, even wrote couple papers, (the latest). 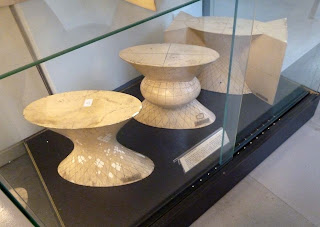 When in Paris, we never made to Conservatoire des Arts et Métiers (on a list for next time!) but we did visited  mathematical models collection in the Institut Henri Poincare. Our guides there were Brigitte Yvon-Deyme and Dominique Dartron - thank you both so much for your kindness and your time! (photos of models in this posting are used by permission of Bibliotheque IHP).
In my introduction to Crocheting Adventures with the Hyperbolic Planes I mentioned the International Congress of Mathematicians in 1954. I was trying to find some picture from this Congress but did not have any success before a book was sent to a print. Now I have a picture I would've loved to have in the book - it was the very first thing David spotted on a wall in IHP.

During the library hours anybody can visit the library to see several cases of the models on a permanent display. 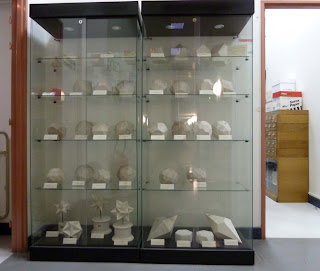 ‎
With a little wink in her eyes M-me Yvon-Deyme pointed out that most of the visitors come to see models not out of mathematical curiousity but they are  people interested in art, particularly the ones who wish to see models photographed by Man Ray.  In the 1930s, the surrealists were interested in various geometries. According to Neil Baldwin, Max Ernst "had taken Man Ray to see the objects on display at the Poincare institute in Paris and had photographed them in a deliberately impressionistic style". These are some of Man Ray's pictures. 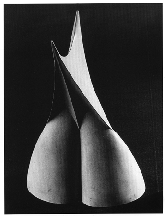 The last photo is an interesting mathematical object - can somebody come up with the equation describing it?


To help students see in space, we materialized the major figures of geometry and descriptive geometry. The use of figures in relief would provide valuable aid to education, especially if one was building these figures by the students." (Anaglyphs The geometric . Paris: Librairie Vuibert, 1912, p. 8).

Man Ray returned to these mathematical models about a decade later when he created series of paintings Shakespearean Equations.

Surrealists interest sparked public interest about IHP mathematical models and since then the models of the IHP have participated in many exhibitions starting with the one at the Palais de la Découverte, built for the Exposition Internationale des Arts in 1937.

On a personal note here I should add that my interest about 1937 exhibition was because of mathematical models and surprised I discovered that famous sculpture Worker and Kolkhoz Woman by Vera Mukhina (born in Riga!) was the centerpiece of Soviet Pavillion in this exhibition. For me that sculpture always associated with the VDNH (Exhibition of Achievements of the People's Economy) in Moscow and also with the opening of Mosfilm movies. Here are some of my photos of mathematical models in IHP in Paris. 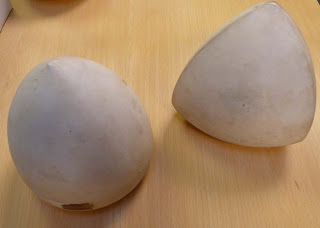 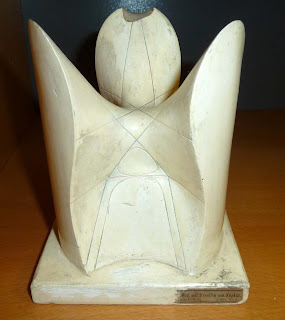 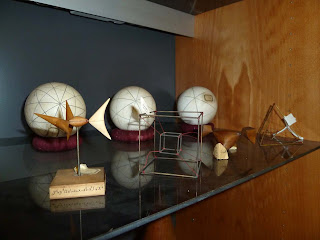 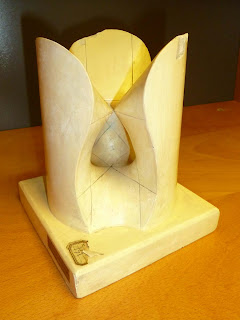 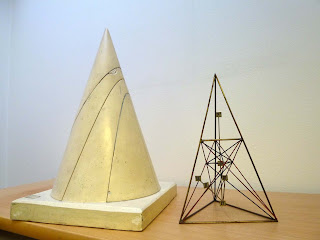 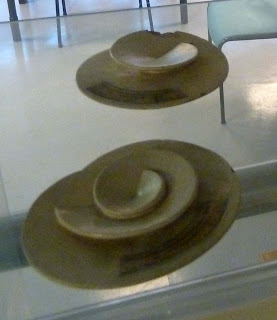 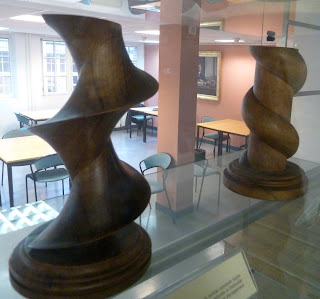 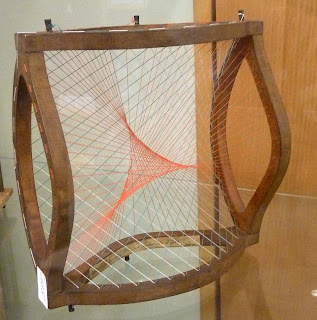 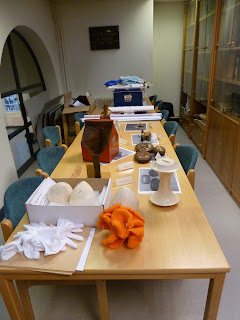 Among all of the IHP mathematical models there will now also be a place for crocheted hyperbolic plane :-)

PS. Geometry continues to be the inspiration for artists - as one can see it in current exhibit Geometric Days.
Posted by Daina Taimina at 5:23 PM