Geometry is in fashion! 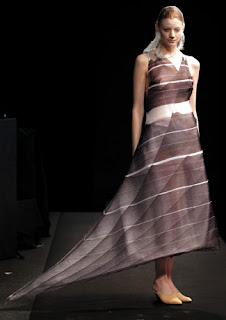 This is a picture from Tokyo Fashion week which ended just couple days ago. Eri  Matsui collection was called "Mathematics, Art, and Fashion". Could this dress be a picture from a calculus textbook? Could the curve there be a tractrix? Then rotated around the bottom edge it would create a pseudosphere, which is a part of hyperbolic plane... or may be... Well, looks interesting.

The next picture I spotted today in German Financial Times with a story about the Tokyo Fashion Week. Mathematics clearly has been an inspiration also for designers Nao Yagi and Hokuto Katsui "mintdesign". Their "face jewelery"(???) reminds me of linkages or geometric design of the motion. More pictures here: 2010 Tokyo Fashion Week 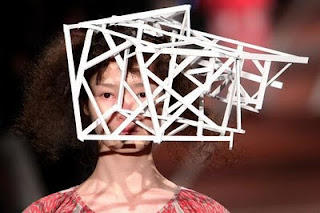 The Japanese fashion designers this year are doing great job of encouraging people to learn more and more about math and particularly -  geometry. Geometry in fashion appeared before but it was two-dimensional, it appeared in fabric design in 1960's and 1970's as in following pictures: 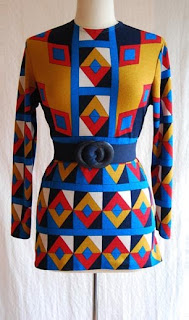 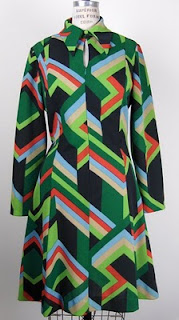 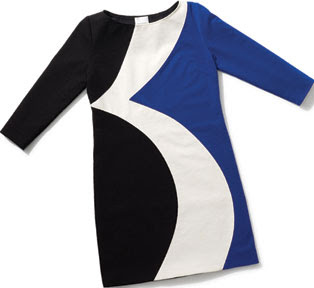 Some revival of this kind of design can be seen in this 2008 dress from Nordstrom collection.
Japanese designer Kazuhiro Takakura graduated from university majoring in mathematics. In 2003 he launched IZREEL and made a debut as a designer himself. 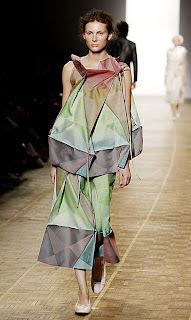 Dai Fujiwara's designs are very mathematical. The whole essence of so called A-POC movement created by Issey Miyake is a mathematical description of the movement as you can see in this short video Issey Miyake A-POC inside Dai Fujiwara now is very successfully continuing this tradition. I first learned about his geometrical designs seeing this wedding dress created from origami patterns.
Last September Dai Fujiwara came to Cornell to meet with Bill Thurston because he wanted to understand Thurston's ideas about 8 possible geometries in three-dimensional space. 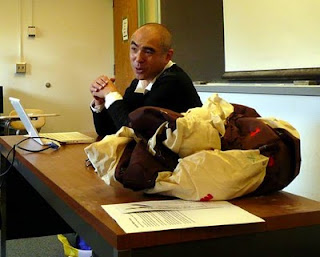 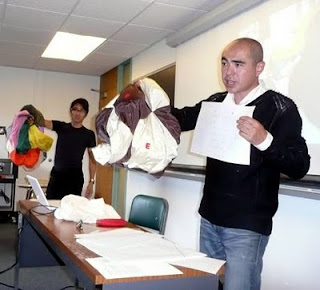 First he told us about A-POC principles in designing clothes. Then he explained that he became fascinated with Thurston's ideas seeing a model in his friend's math professor's office some time ago. Then he learned news about the proof of Poincare conjecture and its connection with Thurston's geometrization conjecture. He said he really wanted to celebrate these great ideas in a fashion collection. 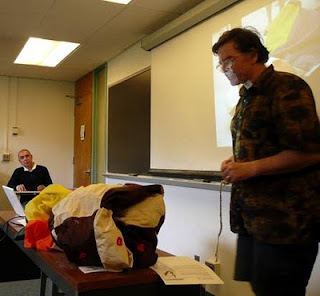 More models were brought in the room, including some of my hyperbolic planes. Then Fujiwara and Thurston continued their discussion until late.
I was eagerly waiting what will come out of this collaboration. Dai Fujiwara's collection was shown on March 5th in Paris Fashion Week. 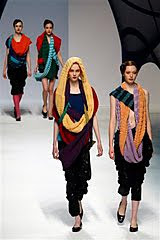 Here is an interview after the show with Thurston and Fujiwara.


"We just felt that art exists also in the mathematical world, the scientific world. So next year probably... the people want to know more about where art exists, not only painting and drawing and also to see the magazine, so mathematics is coming very very close to art. So it's time to take this energy for fashion," Fujiwara told Reuters Television. 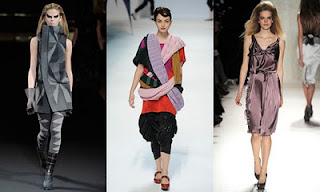 Geometry is appearing also in designs of a rising star in design world, recent graduate from Antwerp Royal Academy of Fine Arts. First she surprised all by her knitwear designs with an unexpected twist. 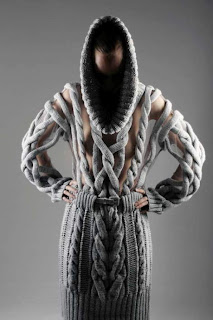 As an avid knitter I am looking at this dress and trying to imagine knitted curves we teach in calculus instead of the cables. May be it would make calculus more tactile and appealing to students?
Recently Shaposhnikova, who is originally from Russia, came up with geometric sculptural designs.
She came up with a collection called Crystallographica 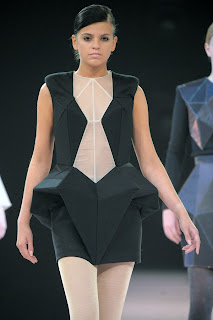 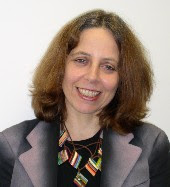 Sandy Black, author of Eco-Chic and Director of the Centre for Fashion Science wrote in The Independent on September 28, 2009
My passion for the fusion of science and design developed at University. Although I learned to knit and     crochet as a child, it was while at university studying maths that my interest in knitting really developed, and I started to design and make unusual and interesting clothes. Being self-taught, I was not restricted by any boundaries and felt I could translate any idea into knitting by working out a logical way of doing it.
This approach clearly owed something to my mathematical background, and for me, there was a natural relationship between the two. I often put many ideas and techniques together to create complex designs, many of which are are non-repetitive, and combine colour, texture and form so that the result appears totally natural. Even now as a research professor, knitting continues to be, for me, the perfect blend of creativity, craft and technology, which my education seemed to want to separate.
So - to be fashionable one has to study mathematics!

Posted by Daina Taimina at 7:11 PM